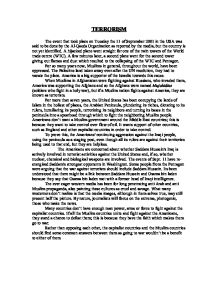 Terrorism. For more than seven years, the United States has been occupying the lands of Islam in the holiest of places, the Arabian Peninsula, plundering its riches, dictating to its rulers, humiliating its people, terrorizing its neighbors and turning it

TERRORISM The event that took place on Tuesday the 11 of September 2001 in the USA was said to be done by the Al-Qaeda Organization as reported by the media, but the country is not yet identified. A hijacked plane went straight for one of the twin towers of the World trade centre (WTC). A few minutes later, a second plane went for the second tower giving out flames and dust which resulted to the collapsing of the WTC and Pentagon. For so many years now, Muslims in general, throughout the world, have been oppressed. The Palestine land taken away even after the UN resolution, they had to vacate the place. ...read more.

Americans don't want a Muslim government around the Middle East countries; this is because they want to take control over flow of oil. It wants support of other countries, such as England and other capitalist countries in order to take control. To prove this, the Americans' continuing aggression against the Iraqi people, using the peninsula as a staging post, even though all its rulers are against their territories being used to that end, but they are helpless. The Americans are concerned about whether Saddam Hussein's Iraq is actively involved in terrorist activities against the United States and, if so, whether nuclear, chemical and biological weapons are involved. ...read more.

The ever eager western media has been for long penetrating anti Arab and anti Muslim propaganda, also painting these cultures as cruel and savage. What many westerners don't realize is that the media images, although in them selves true, may still present half the picture. By nature, journalists will focus on the extreme, photogenic, those who make the news. Many countries don't have enough man power, arms or force to fight against the capitalist countries. If all the Muslim countries unite and fight against the Americans, they stand a chance to defeat them; this is because they have the faith which makes them go to war. Rather than opposing each other, the capitalist countries and the Muslim countries should find some common answers between them as going to war wouldn't be a benefit to either of them. ...read more.