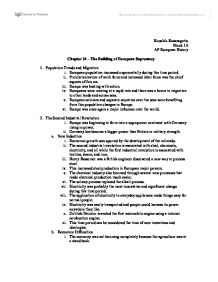 The Building of European Supremacy

Koushik Kasanagottu Block 1A AP European History Chapter 24 - The Building of European Supremacy 1. Population Trends and Migration i. European population increased exponentially during this time period. ii. Prolelarianization of work force and increased labor force was the chief aspects of this era. iii. Europe was busting with action. iv. Europeans were moving at a rapid rate and there was a boom in migration to other lands and across seas. v. European colonies and separate countries over the seas were benefiting from this population changes in Europe. vi. Europe was once again a major influence over the world. 2. The Second Industrial Revolution i. Europe was beginning to form into a superpower continent with Germany rising in power. ii. Germany has become a bigger power than Britain in military strength. a. New Industries i. Economic growth was spurred by the development of the railroads. ii. The second industrial revolution is associated with steel, chemicals, electricity, and oil while the first industrial revolution is associated with textiles, steam, and iron. iii. Henry Bessemer was a British engineer discovered a new way to process steel. iv. This increased steel production in European major powers. v. The chemical industry also boomed through several new processes that made chemical production much easier. vi. The solway process replaced the alkali process. vii. Electricity was probably the most innovative and significant change during this time period. viii. The application of electricity to everyday appliances made things easy for normal people. ix. Electricity was easily transported and people could harness its power anywhere they like. x. ...read more.

iv. Jules Simon of France believed that better housing would provide for better health and increased patriotic feelings. v. By the end of the 19th century and early 20th century, housing was very cheap and healthy for everyone in any class. 5. Varieties of Late-Nineteenth century Women's Experiences a. Social Disabilities confronted by all women i. By the middle of 19th century, women experienced social and legal disabilities in property rights, family laws and education. ii. Women started to earn little freedom about owning property by the end of the 19th century. iii. Women could now own land under their own rights, not their husbands. iv. Moreover, women were subjugated under family laws. v. Women could not get a divorce unless she could prove her husband of committing adultery and other serious crimes while the husband just has to prove his wife of committing adultery. vi. Also, husbands had total control over the children and some countries even let them force their daughters in marrying someone. vii. Women were even at a disadvantage when appealing for rape. viii. Last but not least, education was a big barrier for women. ix. Women were not allowed to learn in a good school because they were usually reserved for men. x. By the end of 19th century, women were allowed into some colleges and universities and could earn a degree equal to that of a man. xi. Men were now starting to experience the competition of women even though women were still being subjugated in some areas. ...read more.

d. Great Britain: Fabianism and Early Welfare Programs i. Fabian society - Britain's most influential socialist group. ii. Its leading members were the Webbs, H.G. Wells and Graham Wallas. iii. They were very strong about democracy and tried to follow its principles. iv. British government reacted to the ideas of the Fabian through a series of unsuccessful reforms. e. France: "Opportunism" rejected i. Jean Jaur�s and Jules Guesde led two major factions of French socialists. ii. Socialism was gaining power in France f. Germany: Social Democrats and Revisionism i. Germany had SDP, German Social Democratic Party. ii. SDP was led by Ferdinand LaSalle, and later Wilhelm Liebknecht and August Bebel. iii. Bismarck dissolved the SDP through his persecution of socialist beliefs. g. Russia: Industrial development and the Birth of Bolshevism i. Russia had many unsatisfied citizens like the Kulaks, peasant farmers. ii. Zemstovs - Local councils that controlled small parts of the mir, village, government iii. Lenin was a deep Marxist who joined the Russian Social Democrats. iv. Their policies were very different from Marxism but they considered themselves Marxist. v. Lenin soon created a Political party called the Bolsheviks, majority, and their rivals; Mensheviks, minority. vi. Lenin's two principles - and elite party and a dual social revolution led future Bolsheviks. vii. Later, Nicholas II took role as leader and assumed a very conservative role. viii. He dissolved trade unions and destroyed all the trade freedoms. ix. Bloody Sunday is the beginning of labor revolutions asking for better work conditions. x. Soviets - Worker groups that controlled the cities. xi. The Duma was created by Nicholas II as an act of compromise for the revolutionaries. ...read more.