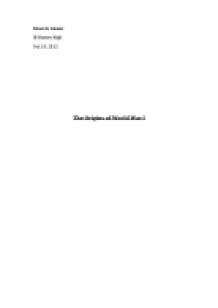 The Origins of World War I

﻿Eduardo Salazar IB History High Oct, 10, 2012 The Origins of World War I Eduardo Salazar IB History High Oct, 10, 2012 The Origins of World War I World War I was thought of as being a short and relatively bloodless war before it began. In 1914 a part of the European population looked forward to this war seeking new professions and economic prosperity. Others, who knew that the form of which wars were being fought was evolving, knew that this up-coming war was to be prevented at all costs. Today World War I is historically considered one of the most prominent wars recorded. World War I was a result of countless problems in what appeared to be a peaceful Europe in 1914, at least on the surface it was. The assassination of Austria-Hungary?s Archduke, Franz Ferdinand by a Serbian nationalist in June 28 1914 was noticeably the trigger for World War I. However, inspecting the actions of other European countries prior to the assassination, it can be determined that the assassination alone was not the sole reason for World War I. ...read more.

However, with the alliances came loyalty. Thus, when the assassination of Austria-Hungary?s Archduke, Franz Ferdinand, occurred Germany was obliged to participate in starting the First World War. Conclusively, Miller argues that imperial Germany had a ruling system too chaotic to have planned a war. While this my not be completely true, it is believed that Germany knew the war was coming and decided to take initiative. In other terms, Germany wanted the war to come on their terms but did not it necessarily as their war. Prior to World War I, there was an increasing competition between European powers as to who obtained the strongest military power. Military leaders would obtain more power then statesmen during this time. Admiral Alfred von Tirpitz and Wilhelm II both were addicted to the naval theories of Alfred Thayer Mahn. Together, Tirpitz and Wilhelm II wanted to make Germany the greatest naval power. Emperor Wilhelm II would find this difficult when Britain introduces the new battleships known as dreadnoughts in 1906. ...read more.

Another key crisis was the Balkan crisis (1912-1913). The Balkan crisis weakened the Turkish Empire which gave nations of the Balkans the opportunity to pressure independence. This crisis later leads to the Austro-Hungarian failure to force Serbia to abandon ideas of a greater Serbia. This then demoralized the empires ruling circle-emboldened Serbia. The Balkan Wars were seen as a desire for peaceful coexistence in Europe. As a result of this war it settled long-standing problems of Balkan nationalism. The Turkish rule was removed and finally, several independent states emerged (Sharp). There are many different aspects that played into World War I taking place including alliances, the Arms Race, and Imperialism. While historians will debate over whether the main cause was Germany, or every countries joint responsibility, the mail cause for the war will never be known for certain. Works Consulted Allan, Tony. The Causes of World War I. Chicago, IL: Heinemann Library, 2003. Print. Barber, Nicola. Living Through World War 1. Chicago: Heinemann Library, 2012. Print. Brendon, Vyvyen. The First World War, 1914-18. London: Hodder & Stoughton, 2000. Print. Sharp, Mike, Ian Westwell, and John Westwood. History of World War I. Tarrytown, NY: Marshall Cavendish, 2002. Print. ...read more.