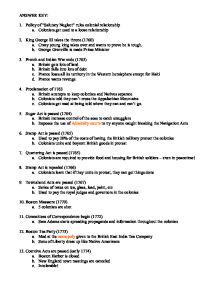 ANSWER KEY: 1. Policy of "Salutary Neglect" rules colonial relationship a. Colonists get used to a loose relationship 2. King George III takes the throne (1760) a. Crazy young king takes over and wants to prove he is tough. b. George Grenville is made Prime Minister 3. French and Indian War ends (1763) a. Britain gets lots of land b. Britain falls into lots of debt c. France loses all its territory in the Western hemisphere except for Haiti d. France wants revenge 4. Proclamation of 1763 a. Britain attempts to keep colonists and Natives separate b. Colonists told they can't cross the Appalachian Mountains c. Colonists get mad at being told where they can and can't go. 5. Sugar Act is passed (1764) a. Britain increase control of the seas to catch smugglers b. Imposes the use of Admiralty courts to try anyone caught breaking the Navigation Acts 6. Stamp Act is passed (1765) a. Used to pay 20% of the costs of having the British military protect the colonies b. Colonists unite and boycott British goods in protest 7. ...read more.

a. Richard Lee proposes it b. Thomas Jefferson writes it c. Changes the purpose of the war in the eyes of the Continentals 20. Battle of Trenton (1776) a. George Washington surprises the Hessians on Christmas day b. Boosts patriot morale 21. Battle of Saratoga (1777) a. Continental army wins this battle in upstate New York b. After this win, France decides to officially side with the Americans 22. Yorktown (1781) a. Colonists win with the help of the French b. Last real battle of the revolutionary war 23. Articles of Confederation ratified a. The first government of the United States 24. Peace Treaty signed in Paris (1783) a. The United States becomes official in 1783 b. The United States is bordered by Britain and Spain c. The western border of the United States is the Mississippi River TO CUT UP #1: 1st Continental Congress 2nd Continental Congress Articles of Confederation ratified Battle of Bunker Hill Battle of Saratoga Battle of Trenton Boston Massacre Boston Tea Party Coercive Acts Committees of Correspondence begin Declaration of Independence French and Indian War ends King George III takes the throne Lexington & Concord Peace Treaty signed in Paris Policy of "Salutary Neglect" rules colonial ...read more.

the Continental Army * George Washington surprises the Hessians on Christmas day * Imposes the use of Admiralty courts to try anyone caught breaking the Navigation Acts * Intolerable! * Last real battle of the revolutionary war * Mad at the monopoly given to the British East India Tea Company * New England town meetings are canceled * Richard Lee proposes it * Sam Adams starts spreading propaganda and information throughout the colonies * Send the "Olive Branch Petition" to King George - one last plea to go back to the old days * Series of taxes on tea, glass, lead, paint, etc * Sons of Liberty dress up like Native Americans * Tell Massachusetts to start raising militias * The first government of the United States * The United States becomes official in 1783 * The United States is bordered by Britain and Spain * The western border of the United States is the Mississippi River * Thomas Jefferson writes it * Used to pay 20% of the costs of having the British military protect the colonies * Used to pay the royal judges and governors in the colonies * Wakes up the Americans to a new purpose for fighting ...read more.