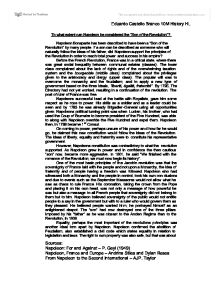 To what extent can Napoleon be considered the &quot;Son of the Revolution&quot;?

To what extent can Napoleon be considered the "Son of the Revolution"? Napoleon Bonaparte has been described to have been a "Son of the Revolution" by many people. If a son can be described as someone who will naturally follow the ideas of his father, did Napoleon support the principles of the Revolution in order to reach total power and success in his empire? Before the French Revolution, France was in a critical state, where there was great social inequality between communal estates (classes). The lower class complained about the lack of rights and of the overwhelming taxation system and the bourgeoisie (middle class) complained about the privileges given to the aristocracy and clergy (upper class). The popular will was to overcome the monarchy and the feudalism; and to apply a new type of government based on the three ideals, "libert�, �galit�, fraternit�". By 1795, The Directory had not yet worked, resulting in a continuation of the revolution. ...read more.

Napoleon believed sovereignty of the public would not entitle people to a say in the government but with to a ruler who would govern them as they pleased. He believed people wanted him; he portrayed himself as an enlightened despot. The "son" had now destroyed one of the three pillars imposed by his "father" as he was closest to the Ancien Regime than to the Revolution, in 1808. Equality, perhaps the most important of the revolutions principles was another ideal torn apart by Napoleon. Napoleon confirmed the abolition of Feudalism, also established a civil code which states equality in relation to legislation and laws. The right to own property was also safe, but that was about it. His Legion of Honour, and the awarding of titles and honours was a clearly a contradiction to equality as these could be bought and kept for life. He claimed that everyone had the chance to be a Duke or have a title but this was untrue, the Nobility was strictly made of the old Nobility, the Bourgeoisie and other people who were awarded for military services. ...read more.

I can conclude that Napoleon in fact brought the Revolution to an end. He had no passion for the principles of the revolution. Napoleon, a son of the revolution, having used it as a stepping stone to grow and reach his final title of Emperor. The son learnt that equality, fraternity and liberty could not rule an empire; they would bring failure and terror to his government. Nevertheless, he centralized his power and willingly used his army to alter the make up of the governments, which were ideas of the Directory. Napoleon retrieved the ideas he thought were necessary and would bring him success form his "father" but others, were discarded. Napoleon was in fact a creation of the revolution as he rose to power because of the situation France was in, though he did not back up its principles using his own ideals created from a combination of both the Revolution and the Monarchy. ?? ?? ?? ?? Eduardo Castello Branco 10M History HL Sources: Napoleon: For and Against - P. Geyl (1949) Napoleon, France and Europe - Andrina Stiles and Dylan Reses From Napoleon to the Second International - AJP. Taylor ...read more.