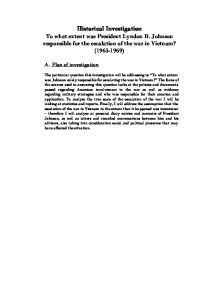 To what extent was President Lyndon B. Johnson responsible for the escalation of the war in Vietnam? (1963-1969)

Historical Investigation To what extent was President Lyndon B. Johnson responsible for the escalation of the war in Vietnam? (1963-1969) A. Plan of investigation The particular question this investigation will be addressing is: "To what extent was Johnson solely responsible for escalating the was in Vietnam?" The focus of the sources used in answering this question looks at the policies and documents passed regarding American involvement in the war as well as evidence regarding military strategies and who was responsible for their creation and application. To analyze the true scale of the escalation of the war I will be looking at statistics and reports. Finally, I will address the assumption that the escalation of the war in Vietnam to the extent that it happened was intentional - therefore I will analyze at personal diary entries and memoirs of President Johnson, as well as letters and recorded conversations between him and his advisors, also taking into consideration social and political pressures that may have affected the situation. B. Summary of Evidence - Kennedy's decision to commit in Southeast Asia was rooted in the American pledge to battle and contain communism: and "Vietnam", Kennedy concluded, "is the place to make [America's] power credible"1. - "If freedom is to be saved, we need a whole new kind of strategy, a wholly different kind of force, and a wholly different kind of training and commitment"2. - Although Kennedy was willing to send U.S. military "advisers" into South Vietnam and mount covert operations in North Vietnam, Cambodia and Laos, he drew the line on U.S. combat units which meant that the South Vietnamese would be responsible for fighting.3 - 22ndNovember 1963: Kennedy was assassinated. ...read more.

On the other hand, there is evidence to support the idea that, in reality, Johnson did not mind this war: The Gulf of Tonkin Resolution stands as a turning point in the Vietnam war, giving USA the legal means to start an 'unofficial war'. The resolution, passed by congress on August 10th 1964 gave the president the right to further escalate the war, which, as figures show, was exactly what he did. Historian Newman suggests that the Gulf of Tonkin resolution was evidence of a second master plan, of Johnson carefully clearing a path to escalation. 19 Characters such as General Taylor and William Westmoreland played a joint role in convincing Johnson that escalation was necessary by providing false statistics that 'proved' their hypothesis while omitting some of the more pessimistic findings.20 They exploited Johnson by giving illusions of imminent victory: during the aftermath of the Tet attacks he announced that the enemy had suffered a "colossal military defeat....the US had never been in a better position in South Vietnam"21, while in reality the PLAF (Peoples Liberation Armed Forces) suffered approximately 40,000 deaths, compared to the 1,100 Americans and 2,300 ARVN (Army of the Republic of Vietnam).22 The two generals can be considered to have given consensus to Johnson for escalating the war by giving him false indication of the US position in Vietnam and taking the conflict in their own hands. A skeptic Johnson was now standing responsible to a country who started asking for an answer: In public he continued to express an optimism that he didn't feel. In his speech at John Hopkins University, April 7 1965, he attempts to justify American involvement in Vietnam despite the situation: "We are there to strengthen world order. ...read more.