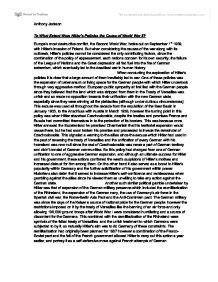 To What Extent Were Hitlers Policies the Cause of World War II?

To What Extent Were Hitler's Policies the Cause of World War II? Europe's most destructive conflict, the Second World War, broke out on September 1st 1939, with Hitler's invasion of Poland. But when considering the causes of the war along with its outbreak, Hitler's policies cannot be considered the only contributing factors, since the combination of the policy of appeasement, each nations concern for its own security, the failure of the League of Nations and the Great depression all fed fuel into the fire of German extremism, which eventually led to the deadliest war in human history. When conducting the exploration of Hitler's policies it is clear that a large amount of them inevitably led to war. One of these policies was the expansion of Lebensraum or living space for the German people with which Hitler undertook through very aggressive method. European public sympathy at first lied with the German people since they believed that the land which was stripped from them in the Treaty of Versailles was unfair and so made no opposition towards their unification with the new German state, especially since they were winning all the plebiscites (although under dubious circumstances). This excuse was used all throughout the decade from the requisition of the Saar Basin in January 1933, to the Anschluss with Austria in March 1938, however the turning point in this policy ...read more.

This was because the British saw the allowing of Germany to rebuild its armed forces as a form of appeasement and so failed to offer their support to France, whereas the French who took a much harder attitude against Germany saw the situation as an increase to the ever constant threat of German invasion along with a Britain that was unwilling to help French security. Secondly the pacts between the axis nations alienated them from their allied counterparts and so brought about an alliance system similar to that of Bismarck's in which the opposing sides easily escalated minor issues and viewed one another with hostility. Lastly German involvement in the Spanish civil war presented two things. One was that it signaled German involvement on the world stage as an active power equal to that of Britain and France, and the second was that it displayed the ferocity of the new German war machine as a provocative act against the allies. Now leaving Hitler's policies, there was a combination of other factors that contributed to the buildup of World War II, the most prominent of which is the policy of appeasement, and the League of Nations. The League of Nations was born out of the First World War and the treaty of Versailles, whose mission statement included upholding the rights of man, disarmament, collective security, settling disputes and improving global quality of life. ...read more.

Appeasement was the worst possible policy when facing a man like Hitler because although Chamberlain saw each of his territorial claims as his last and sought to avoid war, he saw the policy as weakness, and with each submission the allies made to his territorial claims Hitler saw as increased fear and unwillingness to engage the German 'superior' state. Concluding, a variety of factors played a role in the outbreak of World War II. Although combinations of these were directly linked to Hitler's policy of aggressive German expansion and the German economy's dependency on war production, they were not the sole reason for the outbreak of war, since the rise of Hitler was allowed through factors such as the Great Depression. This is shown through sources since during the years of prosperity in the 1920's Hitler gained less than 10% of the vote. Only after the depression had affected Germany did people begin to listen and vote for Hitler. Other factors like the effort of western leaders to strengthen Germany and direct its hostility towards Russia, the harshness of the Treaty of Versailles and the selfishness of each country in only looking after its own self-interest while sacrificing collective security also played a part, an example of this was the Molotov-Ribbentrop pact where despite both nations being arch enemies of one another, in the desire of securing their own national interest, planned the destruction of others. ?? ?? ?? ?? Anthony Jackson ...read more.