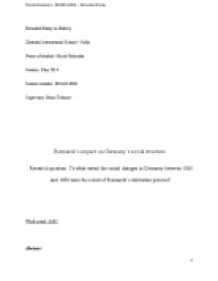 To what extent were the social changes in Germany between 1865 and 1890 the result of Bismarcks deliberate policies?

﻿Nicole Belenska ? 001441-0031 ? Extended Essay Extended Essay in History Zlatarski International School ? Sofia Name of student: Nicole Belenska Session: May 2014 Session number: 001441-0031 Supervisor: Boris Todorov Bismarck?s impact on Germany?s social structure Research question: To what extent the social changes in Germany between 1865 and 1890 were the result of Bismarck?s deliberate policies? Word count: 3,632 Abstract The social changes in Germany between 1865 and 1890 were the result of Bismarck?s clearly focused policies pursuing precise aims: the unification of Germany, Germany becoming an industrial power, destroying old geopolitical alliances and creating new ones, and provoking political actions. Even though Bismarck did not follow a general masterplan, he responded to particular issues like the unification of Germany, the Kulturkampf (?struggle for civilization?, in fact struggle against Catholicism), the growth of the Socialist movement, in a consistent manner and his various domestic policies were tightly connected with his tide-turning foreign policy. In this essay I use the method of breaking down different aspects of the social transformations in Germany and analyzing the causal links behind every single one of them. I find specific reasons for each of those significant changes and I am rather poised to think that those changes responded to objective challenges and Bismarck?s administration just found helpful solutions. I assess the real weight of Bismarck?s policies through hypothesizing alternative solutions. The main idea of Bismarck was to transform Germany from a loose confederation into a powerful empire through three phases: Preparation, Provocation and Nationalism. As the Kulturkampf sought to limit the social importance of religion and banned Catholic education, many opposed Bismarck and the Catholic Centre Party was unable to maintain control. The anti-socialist movement and in particular the assassinations on Kaiser Wilhelm I helped to reduce easily the Socialists?s influence by turning them into the object of public blame: Socialist literature was confiscated, pro-working class groups were banned and people were expelled from their homes. On the other hand Bismarck never went on a conquering rampage. ...read more.

b. Foundations of national identity Germany was already a unified state, yet the German nation was still in the making. National identity and self-determination was still to be enforced on, and embraced by, the vast majority of the German population. This could be achieved through mass propaganda. During the 1870s education in Germany was under the control of the Catholic Church. The church itself might represent a conductor of foreign influence, since it was submitted to the Papacy in Rome. In order for Bismarck to achieve his goal of uniting Germany, he had to use the educational system as a source of pan-Germanic propaganda, which sought to boost the German national identity. The economic advantages of a lively, and liberal, German market slowly brought down the reserves of German states like Hanover, Baden-Wurtemberg or even Bavaria against the creation of a Unitarian German state. Bismarck combined economic pressure with diplomatic prudence by suggesting, and successfully implementing, the creation of a German confederation (1866) in which the smaller states would keep their local governments, much of their local taxes and would keep hold of most important domestic institutions like police and education. Thus, they were misled into thinking that they were not giving up on any important privilege, but instead would only profit from the economic integration of the various German areas. Still, the Catholics were a stain on Bismarck?s unification clause because they followed the Pope rather than the Kaiser. The German Prime minister needed a way to reduce their numbers so he came up with the Kulturkampf. Literally meaning ?culture struggle? these new laws limited many of the religious rituals of the German Catholics, the laws stayed in power from 1871 to 1878. It limited like a disregard of their clerical freedom of speech, completely banning Catholic schools and teachers. Many priests were arrested and either sent to prison or exiled for preaching, their numbers are estimated to be around 1800. ...read more.

It comes easily to mind that when the Kulturkampf was launched, the Catholics would be afraid that it could damage forever their political and social positions. Yet, Bismarck?s anti-Catholic policies did not destroy in the least the Catholics? belief in new Germany. Bennett?s main point is to make people reconsider the connection between religious and national identity but what she argued helps us argue in favour of Bismarck?s historical significance: with or without Catholic minority, with or without the Kulturkampf, which in fact led to nothing, since Catholics did not give up their confessional identity and created one of the most influential political parties in Germany ? Zentrum, Bismarck?s Germany was strong and undivided. ________________ Conclusion Otto Von Bismarck?s role in European history can mislead. On first glance it seems limited to his role in German reunification, which changed the balance of power, destroyed the old alliances, and disrupt the status quo not only in Central Europe but in the Balkan peninsula and the Mediterranean as well. Bismarck dealt a death blow to the Congress of Vienna. His foreign policy caused a historical shift of power in the European continent and the colonial world. Bismarck?s Germany defeated the Habsburg Empire reducing it to a mere satellite state. The swift victory of the German army during the Franco-Prussian war and the system of alliances created by Bismarck quickly isolated France from the continental politics. This created a long-lasting peace which was greatly beneficial for the development, the unification and the germanisation of the young German state. This long period of stability, in combination with the ever-growing rate of industrialisation fuelled the German economy. Conversely, the process of rapid growth turned Germany into a major industrial power. Regardless of some failures in his domestic policies, Bismarck achieved so much through the awakening of German nationalism that the social profile of Germany changed once for all and in fact stood at the basis of social and public policies all over Europe over the later decades. ...read more.