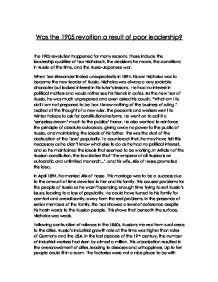 Was the 1905 revolution a result of poor leadership?

Was the 1905 revoltion a result of poor leadership? The 1905 revolution happened for many reasons. These include the leadership qualities of Tsar Nicholas II, the decisions he made, the conditions in Russia at the time, and the Russo-Japanese war. When Tsar Alexander III died unexpectedly in 1894, his son Nicholas was to become the new leader of Russia. Nicholas was always a very sociable character but lacked interest in his tutor's lessons. He had no interest in political matters and would rather see his friends in cafes. As the new Tsar of Russia, he was much unprepared and even asked his cousin, "What am i to do? I am not prepared to be Tsar. I know nothing of the business of ruling." Excited at the thought of a new ruler, the peasants and workers went to Winter Palace to ask for constitutional reforms. He went on to call it a 'senseless dream' much to the publics' horror. ...read more.

This urbanisation resulted in the overcrowdment of cities, leading to diseases and unhappiness. Up to ten people could fit in a room. The factories were not a nice place to be with poor health and safety regualtions, harsh dicipline, long hours and low pay. The workers had reached a level of overall discontent, and they felt that the Tsar was not helping the situation. Georgi Gapon thus formed a union of Russian workers, which was very popular. Russia as a country was very backward compared to its western neighbours. There were poor communications links and the farmers were self-sufficient, relying on their own produce. This means that should there be a poor harvest; the farmers would starve, resulting in extreme discontent towards the Tsar. This happened in1897, 1898 and 1901. One could argue that Tsar Nicholas II had become the leader of an already problematic country, that was geographicaly huge and therefore it was hard to communicate, thus not being his fault. ...read more.

He then decided to keep the old regimes that seemed to be working, much to the horror of the public. His marriage and family life played a big part in his imperial role. Alix of Hesse advised him to keep autocracy, and she was the only person Nicholas listened to. He devoted more time to his family than political matters. Urbanisation caused upset in living conditions, and working conditions. The pubic felt that the Tsar didn't help them, and thought they were being harshly treated. The famines of 1897, 1898 and 1901 caused discontent towards the Tsar for not doing anything about it, and they started to look for faults.The Russo-Japenese war affected the overall morale and the military pride Russia once had. Nicholas mismanaged the war, and people questioned his military leadership skills. 'Bloody Sunday' was a short term cause of the revolution. The way the leader of Russia dealt with this angered the pubic, The Tsar unjustly crushed the petitioners, by which time, the Tsar was a hated figure in Russia. ...read more.