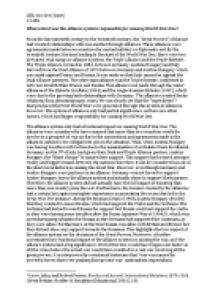 What extent was the alliance system responsible for causing World War One?

﻿LEE, Soo Gee (Suzie) 11 ABe What extent was the alliance system responsible for causing World War One? From the late ninetieth century to the twentieth century, the ?Great Powers? of Europe had created relationships with one another through alliances. These alliances were agreements made between countries for mutual military or diplomatic aid. By the twentieth century, the time leading to the start of the World War One, there were two prevalent rival camps or alliance systems: the Triple Alliance and the Triple Entente. The Triple Alliance, formed in 1882, between Germany, Austria-Hungary and Italy, derived from the Dual Alliance of 1879 between Germany and Austria-Hungary, which was made against France and Russia. It was made so that Italy cannot be against the Dual Alliance partners. The other main alliance was the Triple Entente, confirmed in between Great Britain, France and Russia. This alliance was made through the minor alliances of the Entente Cordiale (1904) and the Anglo-Russian Entente (1907), which were due to the growing bad relationships with Germany. The alliances created frosty relations; thus, stemming many crises. We can clearly see that the ?ingredients?[1] that produced the First World War were generated through this system of alliances. However, this system of alliances only had partial significance, as there are other factors, which had bigger responsibility for causing World War One. The alliance system only had a fractional impact on causing World War One. ...read more.

This view supports the idea that the alliance system only had a partial, limited significance, as there are so many other factors with bigger responsibilities for starting the war. In addition, the actions of the respective Great Powers had important responsibility, which emphasizes that the system of alliances was not so significant in creating the war. After the assassination of Archduke Franz Ferdinand, on 28th of June 1914, the Emperor, Franz Joseph was actually pleased, as his nephew had married someone that was part of the royal social circle. The Emperor felt that ?God has reasserted the rules?[4]. Yet, after the government found Serbian involvement, they acted against Serbia, through the ten-point ultimatum on 23rd of July 1914, as a ?renunciation of our (their) Great Power position?.[5] The ultimatum was intended by the Austrian government to have very difficult demands so that Serbia would be unable to submit to. Thus, this ultimatum can be seen as a significant action of the Great Power, Austria-Hungary, which introduces the war. In addition, the Great Power, Russia had a big impact on driving the start of the war as the Russians began mobilizing secretly on the 23rd of July 1914, in support of the Serbians. Furthermore, Russia wanted to prove its strength due to its humiliation in the Bosnian Crisis. The Russia mobilization was crucial factor to starting the war as it was popularly thought ?mobilization means war?[6]. ...read more.

This was a major event in the start of the war, as the Serbian terrorist group the Blank Hand supported the ring of assassins, which favored a united south Slav state, a Yugoslavia, causing Austria-Hungary act against Serbia. Furthermore, Militarism moderately added to causing the war. Militarism a crucial factor as it is the confidence of a country as it highlights the nation?s strength to go to war. There was also rivalry in military as to having the most mobilized military. For example, France set out the Three Year Service Law where they extended service requirement of conscripts. Also, during the Mulliner Panic of 1909, Britain feared a stealth buildup when it was found that Germany had secretly contracted to build two battleships. However, due to military rivalry, Britain responded later with the slogan ?We want eight [new battleships] and we won?t wait.? Furthermore, imperialism caused tension and more competition, which contributed to causing the World War One. The German concept of Weltpolitik created rivalry with Britain as Britain was the biggest empire and Germany?s new policy was a threat. In conclusion, the alliance system was only partially responsible for causing the World War One. The system of alliance was more a symptom of other bigger factors and responsibilities that caused the World War One. Although, the alliance system may have had a very small responsibility for causing the world war one but there always will be many opinions on which factor has what degree of importance. Word Count: 1467. ...read more.