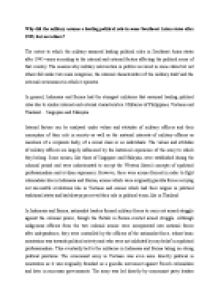 Why did the military assume a leading political role in some Southeast Asian states after 1945, but not others?

﻿Why did the military assume a leading political role in some Southeast Asian states after 1945, but not others? The extent to which the military assumed leading political roles in Southeast Asian states after 1945 varies according to the internal and external factors affecting the political scene of that country. The reasons why military intervention in politics occurred in some states but not others fall under two main categories, the internal characteristics of the military itself and the external environment in which it operates. In general, Indonesia and Burma had the strongest militaries that assumed leading political roles due to similar internal and external characteristics. Militaries of Philippines, Vietnam and Thailand? Singapore and Malaysia Internal factors can be analysed under values and attitudes of military officers and their conception of their role in society as well as the material interests of military officers as members of a corporate body, of a social class or as individuals. The values and attitudes of military officers are largely influenced by the historical experience of the army to which they belong. Some armies, like those of Singapore and Malaysia, were established during the colonial period and were indoctrinated to accept the Western liberal concepts of apolitical professionalism and civilian supremacy. ...read more.

Southeast Asia countries where the military budget is substantial and salaries are high, military coups have not taken place. Singapore, being the ASEAN country which spent the highest proportion of total government expenditure, has never experienced a military coup. In Singapore and Malaysia both, military officers believe that their salaries are good and their professional interests well provided for. The armies are unlikely to engage in political activity against the established government. Moreover in Singapore, military officers have qualifications in great demand outside the armed forces; so disgruntled young officers do not plan coups. Before Martial Law, Philippines never experienced a military coup due to the small size of the armed forces, making it easier for the government to meet military expectations without imposing too high a burden on national budget. However after Martial Law was declared in 1972, army size increased greatly and salaries have been raised, making the cost of maintaining the military a bigger burden on the country. In the cases where the civilian government has failed to meet the expectations of the middle class, military coups had a higher chance of occurring, because the military represented the broader interests and grievances of the middle class. ...read more.

The takeover of complete power in 1966 was just after the collapse of the Guided democracy period. For Thailand, the withdrawal of the military from direct control of the government only demonstrated the inherent weakness of civilian regimes, especially in the three years after 1973 when three successive prime ministers presided over ineffective and divisive coalitions before the military took over in 1976. In the Philippines, impending destruction and disorder threatened to undermine the democratic system while providing the president with grounds to consolidate his own power by declaring Martial Law and bring the military in as a junior partner. In Singapore and Malaysia, governments have been able to rule well, achieve economic growth and are widely regarded as legitimate. Hence there has never been a challenge to take over from the military. In Malaysia, military represented the national Operations Council set up in 1969 after the riots but it never challenged the government and even withdrew when parliament was restored in 1971. Thus, it can be seen that a variety of factors led to some Southeast Asian countries having militaries assuming leading political roles and not others, depending on its past situation and situation at that point in time as well as certain characteristics unique to that particular country. 1560 words ...read more.