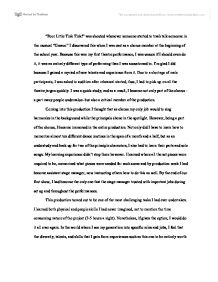 "Poor Little Tink Tink!" was shouted whenever someone started to trash talk someone in the musical "Grease." I discovered this when I was cast as a chorus member at the beginning of the school year. Because this was my first theatre performance, I was unsure if I should even do it, it was an entirely different type of performing than I was accustomed to. I'm glad I did because I gained a myriad of new talents and experience from it. Due to a shortage of male participants, I was asked to audition after rehearsal started; thus, I had to pick up on all the theatre jargon quickly. I was a quick study, and as a result, I became not only part of the chorus -a part many people undervalue- but also a critical member of the production. ...read more.

This production turned out to be one of the most challenging tasks I had ever undertaken. I learned both physical and people skills I had never imagined, not to mention the time consuming nature of the project (3-5 hours a night). Nonetheless, if given the option; I would do it all over again. In the world where I see my generation into specific roles and jobs, I feel that the diversity, talents, and skills that I gain from experiences such as this one to be entirely worth the time spent doing them.This isn't to say that I don't have any specific goals or dreams in life (because I do), but I feel that these goals or dreams cannot be achieved if I am not diversifying my talents as well as improving them. ...read more.

So sure, I could have spent a few more hours studying rather than volunteering at the senior care center, but in the whole scheme of life, is a higher grade on a test that only cares about how well you memorized a bunch of steps or rules, but not how to apply them more important than actually being involved in making a difference in the world? Maybe I'm wrong, but I would strongly disagree and beg to differ with the person who attempts to convince me that I am. Becoming a compassionate person, with a good conscience, and a thirst for knowledge so that I can become a competent leader in this world... That is my desire, and I know that although I have exhausted all the experiences that high school has to offer me, new experiences at my future college and career will continue to satiate that thirst. ...read more.