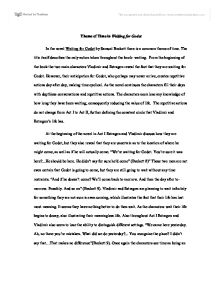 Time in Waiting for Godot

Theme of Time in Waiting for Godot In the novel Waiting for Godot by Samuel Beckett there is a common theme of time. The title itself describes the only action taken throughout the book- waiting. From the beginning of the book the two main characters Vladimir and Estragon reveal the fact that they are waiting for Godot. However, their anticipation for Godot, who perhaps may never arrive, creates repetitive actions day after day, making time cyclical. As the novel continues the characters fill their days with depthless conversations and repetitive actions. The characters soon lose any knowledge of how long they have been waiting; consequently reducing the value of life. The repetitive actions do not change from Act I to Act II, further defining the constant circle that Vladimir and Estragon's life has. At the beginning of the novel in Act I Estragon and Vladimir discuss how they are waiting for Godot, but they also reveal that they are uncertain as to the location of where he might come, as well as if he will actually come. ...read more.

"We came here yesterday. Ah, no there you're mistaken. What did we do yesterday?... You recognize the place? I didn't say that...That makes no difference"(Beckett 9). Once again the characters see time as being an absurd thing that does not matter. "He said Saturday. I think. You think...But what Saturday? And is it Saturday? Is it not rather Sunday? Or Monday? Or Friday?"(Beckett 10). The characters are still waiting for Godot and are beginning to repeat their actions. Act II opens with "Next day. Same time. Same place"(Beckett 61). The only thing that seems to have changed is the leafless tree from Act I now has leaves. However, Estragon does not even recognize that it has changed. "Look at the tree. Was it not there yesterday? Yes of course it was there, do you not remember? You dremt it. Is it possible you've forgotten already? ...read more.

Their life continues to be meaningless and decay. The dialogue throughout Acts I and II illustrate the cyclical time the Vladimir and Estragon's life has. Most of the novel one of the Characters is not able to remember what they did yesterday or the location that they were in. This forgetfulness makes those actions become meaningless and not matter. Waiting for Godot is a repetitive action that has no end. It seems as though every day they will continue to wait for something, repeating the same process as the day before. The change in roles at the end of the novel, however the same dialogue suggests that these characters are interchangeable after all. The entire novel Vladimir and Estragon continue to wait and if the novel were to continue the characters would remain waiting. This waiting provides evidence that Vladimir and Estragon take no responsibility for their life. They are willing to waste their life away just sitting, waiting and repeating the same actions for someone else to come, or take responsibility for their life. ...read more.