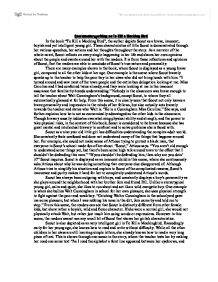 Commentary writing on To Kill a Mocking Bird In the book "To Kill a Mocking Bird", the author depicts Scout as a brave, innocent, boyish and yet intelligent young girl. These characteristics of little Scout is demonstrated through her various speeches, her actions and her thoughts throughout the story. As a narrator of the whole novel, Scout reflects on every single happening in her life and shares her own opinions about the people and events around her with the readers. It is from these reflections and opinions of Scout, that the readers are able to conclude of Scout's true nature and personality. There are many examples shown in the book, where Scout is displayed as a young brave girl, compared to all the other kids at her age. One example is the scene where Scout bravely speaks up to the teacher to help the poor boy in her class who did not bring lunch with him. "I turned around and saw most of the town people and the entire bus delegation looking at me. ...read more.

"Scout," Atticus says. "You aren't old enough to understand some things yet, but there's been some high talk around town to the effect that I shouldn't be defending this man." "If you shouldn't be defending him, then why are you doin' it?" Scout inquires. Scout is displayed as an innocent child in this scene, where she continuously asks Atticus about why he was doing something that everyone else disapproved of. Although Atticus tries to simplify his situation and explain to Scout of the complicated reasons, Scout's innocence and purity makes it hard for her to completely understand Atticus's words. Scout has always been outgoing with boys, and constantly displays a boy's personality as she plays around the neighborhood with her brother Jem and friend Dill. Unlike a stereotypical young girl, calm and quiet, she likes to run about and act like a wild energetic boy. One example is when she bullies Walt Cunningham in school for her own pleasure, she uses physical strength to fight against the poor and weak boy. "Catching Walter Cunningham in the schoolyard gave me some pleasure, but when I was rubbing his nose in the dirt, Jem came by and told me to stop." ...read more.

As displayed in the book, the readers not only can see that the teacher was mentally surprised at Scout's ability to read, which shows that she is different from other kids in the classroom, but also Scout's true intelligence and cleverness. The scene continues on with Scout explaining to the readers how she was naturally born with the gift. "I never deliberately learned to read, but somehow i had been wallowing illicitly in the daily papers. Reading was something that just came to me, as learning to fasten the seat of my union suit without looking around." From these reflections of Scout's, the readers eventually understand more of Scout's uniqueness and speciality with her gifted intelligence. Scout as the narrator of this novel is presented as an extremely complicated character, with so many different characteristics to her personality. However in the first half of the book, Scout is mainly shown as a brave, innocent, boyish and intelligent child. There are numerous scenes in the story where Scout displays either of these features, that readers are easily able to discover all of these qualities of young Scout Finch. ...read more.