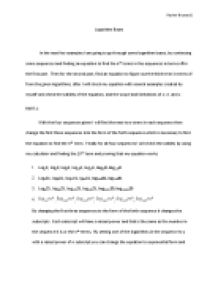 I am going to go through some logarithm bases, by continuing some sequences and finding an equation to find the nth terms in the sequences

In the next few examples I am going to go through some logarithm bases, by continuing some sequences and finding an equation to find the nth terms in the sequences in terms offor the first part.  Then for the second part, find an equation to figure out the third term in terms of from the given logarithms, after I will check my equation with several examples created by myself and check the validity of the equation, and the scope and limitations of a, b, and x.

With the four sequences given I will find the next two terms in each sequence then change the first three sequences into the form of the forth sequence which is necessary to find the equation to find the nth  term.  Finally for all four sequences I will check the validity by using my calculator and finding the 10th term and proving that my equation works.

By changing the first three sequences to the form of the forth sequence it changes the subscripts.

Next to prove the equation using my calculator I put 10 in for n again.

, but then you have to divide to get the final answer  the logs will cancel leaving you with.  Then if you plug 10 into the equation you will also get  proving that the equation works.

and x were fractions they would make a positive number.

This shows that having x in decimal form will not work to fit the equation.

This also shows that having a as a decimal will not work in the equation.

We can also put zero in as the a or x to see if that works in the equation.

This shows that having a zero in for the x value will not work and cause an error.

This also shows that have zero in the for the a value will not work as well and also causes an error in the calculator.

From all of these examples in part 1 and part 2 I have found equations to find the nth terms in the form of.  Also I found an equation to find out a way to calculate the third term in the set of logarithms.  I have given examples that I have made up myself and proved the validity of the problems.  Finally I found the scope and limitations of the logarithms in part 2.