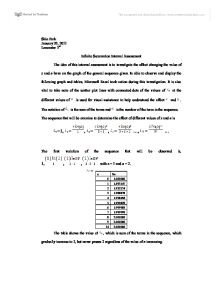 Infinite Summation Internal Assessment The idea of this internal assessment is to investigate the effect changing the value of x and a have on the graph of the general sequence given.

The idea of this internal assessment is to investigate the effect changing the value of x and a have on the graph of the general sequence given. In able to observe and display the following graph and tables, Microsoft Excel took action during this investigation. It is also vital to take note of the scatter plot lines with connected dots of the values of

at the different values of

is used for visual assistance to help understand the affect

is the number of the term in the sequence.

The first variation of the sequence that will be observed is, 1,

The table shows the value of

, which is sum of the terms in the sequence, which gradually increase to 2, but never passes 2 regardless of the value of n increasing. 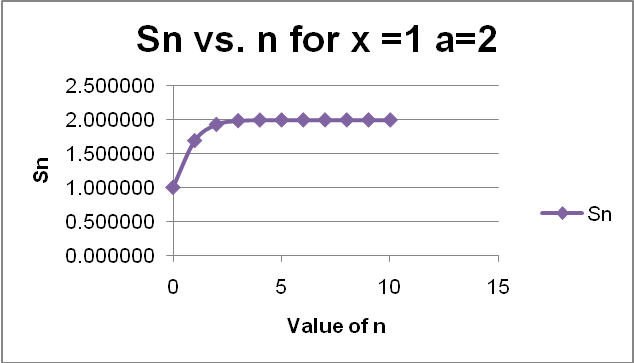 The graph above displays x=1 a=2 in the sequence and how its sum affects this line.

which is the x-axis, shows that

never passing through 2 because 2 is the horizontal asymptote, thus even if the value of n increases,

would still be smaller than 2.

The next sequence will be a similar concept of the previous one, but the change in values of x=1 and a=3 which is 1,

that approach to 50, but never actually reaches 50. As the table is shown, it is visible that at each value of

increases at larger numbers than the other tables before, it is due to the sum of the sequence is reaching a high value of asymptote in the same amount of time. 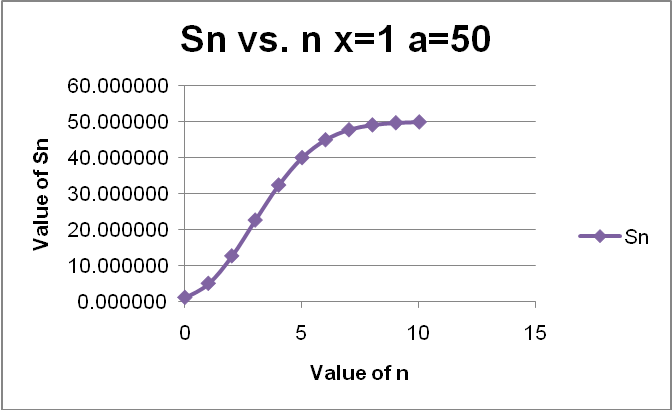 This graph demonstrates the values of

approaches the horizontal asymptote of 50, which is the value of

. Compare to the graphs before, this graph has a different form of a line due to larger value of a.

From the investigation of the different values of

with the value of

being 1 in this general sequence,

It can be stated that the value of

is 1 while the horizontal asymptote is determined by the value of a in the sum of this sequence as it approaches infinite. Since

remained as 1, the only changing variable in this whole sequence was

was the number where the horizontal asymptote was present on the y-axis.

Now the sum of the infinite sequence

must be determined by using a different formula unlike the previous one,

This is an example of

As the table is shown, the value of

is defined as 2 instead of 1 looking back at the section before, and the value of

being 5 with the increasing value of n until 9. The value of

continues to increase, but never exceeds 32. 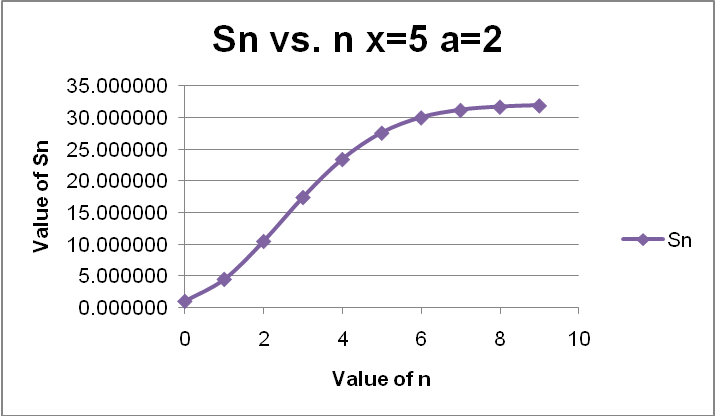 Next other values of

will be investigated to guarantee the general statement is valid,

The table above shows a fast increasing value of the sum of the sequence until n=6 as it approaches 16 at a slow rate, which 16 is the horizontal asymptote since 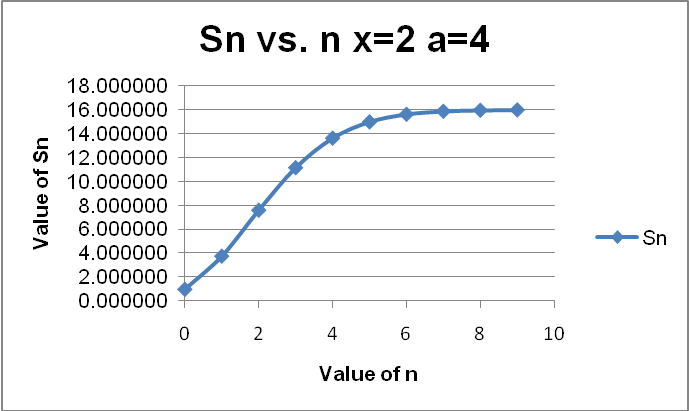 This graph displays the value of

. There is exponential growth in the sum of the sequence until the value of

is about 3, where the rate of line of increase begins to slow since it is approaching the horizontal asymptote of 16.

Another example is with

(5, 2) and using the same sequence as before

increases, but looks as it will never exceed 25, due to the fact that 25 is the horizontal asymptote. 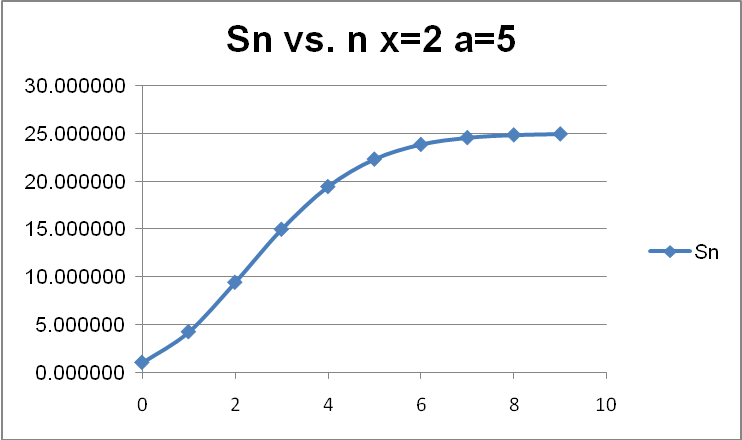 Since in this sequence

= 25, the horizontal asymptote is then 25, which is why the line has exponential growth until it approaches 25 creating an almost straight line.

After the investigation of the infinite sequence,

, with the changing values of

, it is clear that

approaches infinite. The limitations of this general statement could vary since

was only investigated until certain numbers not infinity, therefore it was examination and judgment that created the general statements about the horizontal asymptotes that affect the graph of the sum of the infinite sequence.