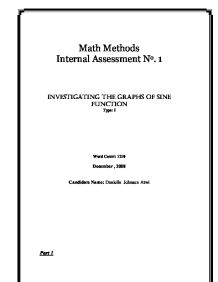 Investigating the Graphs of Sine Functions

Math Methods Internal Assessment No. 1 Investigating the Graphs of Sine Function Type: I Word Count: 1210 December , 2008 Candidate Name: Daniella Johnson Atwi Part 1 Graph of: y = sin x Characteristics of this function * It has three complete cycles * Period of the function = 2? * Amplitude = 1 * Maximum = 1 * Minimum = -1 * Centerline: y = 0 (x-axis) Comparison of graphs: y = 2sinx, y = 0.3 sinx, y = 5sinx The graph above illustrates the sine function with several values (coefficients). Each sine function taken is displayed in a different color to differentiate between them and distinguish the shapes of each one. The graphs above are dilated versions of y=sinx, they are vertically stretched. The bigger the coefficient is, the bigger the amplitude. The similarities existent between the graphs is that they all have the same period (2?) and a centerline (y=0). However, the difference between them is the amplitude and and minimum and maximum values that they reach. For y= 2sin(x), the amplitude is 2, the maximum is 2, and the minimum is -2. ...read more.

= -sin(x). Hence, a negative value of B will cause a reflection about the x-axis. In conclusion, the graph of y=sinB(x) compared to y=sin(x) has an amplitude of 1 but a period which is represented by ? . If the value of B is negative, the graph will be a reflection of y=sin?B?x about the x-axis. Part 3 Investigation of graphs of the type y = sin(x+C) The graphs illustrated above are for the investigation of the effect of transformations on position of graphs, since the amplitude (1) and period (2?) remain the same. Since in the above functions a certain value is added to the x, it is the case of a horizontal translation to the left since the values added are positive. If the values of C were negative then the graph would move to the right according to the value of C (2 units, 5 units...) In conclusion, the value of C doesn't not effect the amplitude or the period of the function, only its position along the x-axis. Graphs of the function y = sin(x+C) Shift C units to the left of the x-axis, while graphs of the function y = sin(x-C) ...read more.

The amplitude of the function is ?A?. If A is < 0, the graph is a reflected about the x-axis. For different values of B: the value of B affects the x values. As B increases, the period decreases. The period of the graph will be ? . If the value of B is negative, the graph will be a reflection of y=sin?B?x about the x-axis. For different values of C: the values of C affects the x-values. A positive value of C translates the graph C units to the left, and a negative value of C shifts the graph horizontally C units to the right. Part 5 The graphs of sine functions and cosine functions are similar in that they both take the shape of a waveform graph, they have a period of 2? and an amplitude of 1. However, they are also different; the cosine function is shifted units to the left of the sine function. In order to transform the cosine function from the sine, A remains the same = 1, the period B is also =1, and C= . The graph of y=sin(x + ) is identical to y=cosx ?? ?? ?? ?? 10 Mia Malda Atwi Sine Function ...read more.