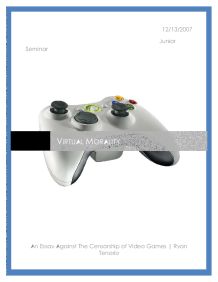 12/13/2007 An Essay Against The Censorship of Video Games | Ryan Tenorio Junior Seminar Video games have become about as main-stream as television and movies, and because of the immense market it has, video games are in a state where they can begin to influence, just like other forms of entertainment media. People from both sides of the coin argue on how much influence video games, more specifically violent ones, are having on the people that play them. Around the United States, bills are beginning to sprout from these debates on banning games based on if they may be harmful for children. However, it is argued that these bills aren't justified because they work off of declaring if a video game is morally suitable or not, and have no scientific basis. I believe that the completely censorship of games is a bad idea because video games are valid expressions of ideas, the arguments against them are based off of questionable research, and the matter simply cannot be legislated upon because the whole argument is based off of moral values. Since the 1990's, video games have become a target for relating bad behavior in children. Early games that featured violent or suggestive scenes such as Mortal Kombat and Night Trap were some of the first titles to be used as a basis for argument. ...read more.

I think it is important that games aren't censored, because it is even stated in the Universal Declaration of Human Rights in Article 19 that humans have the Freedom of Speech.3 Some people, such as U.S. District Judge Stephen N. Limbaugh Sr. stated that games aren't a form of expression because they do not convey ideas, and therefore believes that games shouldn't be constitutionally protected.4 He was showed evidence on why games are bad, however they were only clips of a few games from the same genre that have been sources of controversy in the past. People have rebuked his statements and similar statements, saying that there has always been violence in entertainment media, even in books, that have exposed kids to violence, therefore video games shouldn't be censored. Video game designer Will Wright stated that video games are the only type of entertainment medium in which people choose the actions of their characters, and that many games, such as The Sims, which tasks the player with creating and making a virtual family successful, are encouraging people to examine their own values based on how their character lives.5 I believe then that it is incorrect to call video games not art or speech, because they can in different ways invoke thinking within people. ...read more.

Arguments that people that cause violent acts are also gamers cannot apply in today's world anymore, where the majority of kids and adults in their twenties play video games. It is also obvious that just by law you can't censor video games because they are seen as a legitimate work of art and expression. Sure, there are people that argue that video games aren't art, but that sort of thing happens with all forms of media. Video games, in my opinion, they are simply being targeted because of the time period we are in and how big a part it is of our pop culture; T.V. was a big target for censorship in the late 20th century simply because it was becoming main-stream at the time. At this point in time, video games are really starting to become a substantial part of people's lives, and it is because of this that I think is the only reason politicians and activists are trying to employ new laws towards the banning and censorship of video games. The whole situation has really just blown out of proportion because of the media coverage it has received, but in the end you can't disagree that the complete censorship of video games is just as awful idea. ...read more.