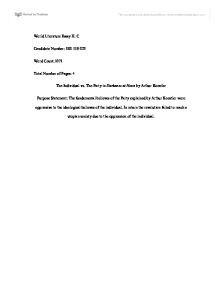 World Literature Essay II: C Candidate Number: 000 119 023 Word Count:1071 Total Number of Pages: 4 The Individual vs. The Party in Darkness at Noon by Arthur Koestler Purpose Statement: The fundamental believes of the Party explained by Arthur Koestler were oppressive to the ideological believes of the individual. In return the revolution failed to reach a utopian society due to the oppression of the individual. The party describe in Darkness at Noon by Arthur Koestler represents the governmental and economic system of communism in the Soviet Union during the 1930's and 40's with the main intend of reaching a utopia in the real world. The sacrifice of the individual was necessary to carry out the will of history in the eyes of the party. The ideology of the party creates a conflict in Darkness at Noon where the ideologies of the party undermined the ideas of the grammatical fiction with a result of a failed revolution. An individual perception is needed to help the rest of humanity, without it nothing can be done to change society. ...read more.

Extreme rationalism, logic, and the sacrifice of ethical decisions had hindered the revolution. The idea of vivi-section where all means justify the ends and the individual is needed to be sacrifice like an experimental lamb highlights the opposition of the party towards the grammatical fiction. (Koestler, 128). Rubashov has followed this method his whole life and has done many unethical actions were he has lost his only love of his life. He has sacrificed many individuals in his life, but what is more compelling is the scarification of Arlova. The abstract idea to obtain a utopia on the world by logical means has altered the perception of Rubashov. The pain of his eyetooth represents his altered perception where it only starts to hurt when he feels guilty about his betrayals to save the party. Rubashov's pain is a symbolism to the idea that the only way one can help another individual one must relied on his own individual feelings to help the other. The party stood against that and only relied upon logic and any means necessary. ...read more.

Without a deep understanding of the grammatical fiction and the oceanic sense, the leaders were unable to meet with the demands of the masses. Instead, the masses were being prosecuted and sacrificed for the livelihood of the party. In conclusion, Darkness at Noon Arthur Koestler highlights the main ideologies of the communist party in Russia and their goal for a new Utopia. However, he argues that the revolution ultimately failed due to the oppression and disregard of the individual and the goal for a new utopia was altered. The understanding of the silent partner or the individual can connect to a humanitarian level were one makes choices that benefit everyone, not make decisions based on pure logics that benefit most but forget others. The misunderstanding of the individual leads one to the path of selfishness and close-mindedness that creates dictators and corrupt leaders. The idea that we are all trapped in the grain of salt speaks volume to my ideas. I truly feel that we need to understand ourselves fully in order to help others because we are the same and harming others directly or indirectly can result in harming our own selves. ...read more.