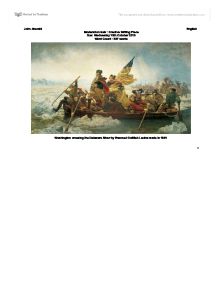 Moderation task : Creative Writing Piece Due: Wednesday 13th October 2010 Word Count : 897 words Washington crossing the Delaware River by Emanuel Gottlieb Leutze made in 1851 It was a week before Christmas day in the year 1776. The wind was cold and hard as it brushed past my face. I felt a chill run through my spine, but for the glowing sun, the cold would have been unbearable. "Why won't God give me a break?", I thought. I was thinking about something, how the problem we were faced with would be solved, even if only temporarily. As the wind rushed by and I stood there thinking deeply, it came to me all of a sudden. After that, I pondered over and over a plan until I had it perfected to the last detail, then I simulated the results in my head. Ninety-nine times out of hundred it failed, but that one time it didn't fail provided me with enough hope. Moreover, you don't undergo a revolution without taking some risks. ...read more.

It was our time to attack! They needed to know that the revolution was more than just an annoyance or small pest. We were the real deal, I thought to myself. Hence I had to mobilize the army fast. A majority of my army were mercenaries and their contracts were to expire at the end of the month to return to their homes. An additional problem was that two of my armies had not made it back yet. I quickly devised a plan. We were going to attack the Hessian-held town of Trenton just across the Delaware River. We planned all week. I had five to six thousand men at my disposal, though many of them were unfit for battle. Even though this was a large number, we had a lot of men who deserted us and left the army and the remaining soldiers were low on morale. Something drastic needed to happen to life the hearts of the soldiers unless the cause was lost, because only I still had the passion and desire burning, and I so desperately wanted to ignite there flames of passion too. ...read more.

On Christmas eve, in the evening, we had a big feast to celebrate. During the day we let the men spend time with their families. Late that night, we travelled to the departure location and set up a camp there. In the morning the weather was horrendous and the river treacherous. Raging winds combined with snow, sleet and rain to produce almost impossible conditions. To add to the difficulties, many of the troops no longer had shoes, and we still needed to cross 9 miles of ice-swollen Delaware to get to Trenton. Definitely it was going to be a long day, and a vicious battle still awaited us. That said, I was convinced we would be victorious. Before we set out, I looked around at all the men who had joined me, and felt a sense of humility. All these men had trusted and believed in me, and I was determined I wasn't going to let them down. I turned back to focus on the assignment ahead. As the ships were set afloat, I held my head high, gazing forwards. The sun breaking the clouds allowed its light rays into my eyes and its warmth overwhelmed me, and again I felt reassured. ...read more.