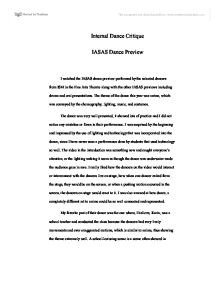 Internal Dance Critique IASAS Dance Preview I watched the IASAS dance preview performed by the selected dancers from ISM in the Fine Arts Theatre along with the other IASAS previews including drama and oral presentations. The theme of the dance this year was anime, which was conveyed by the choreography, lighting, music, and costumes. The dance was very well presented, it showed lots of practice and I did not notice any mistakes or flaws in their performance. I was surprised by the beginning and impressed by the use of lighting and technology that was incorporated into the dance, since I have never seen a performance done by students that used technology so well. ...read more.

A school-lecturing scene is a scene often showed in anime, especially where students raise their hands in a unrealistic way, which was directly showed in the choreography. It was also one of the dances where I understood what was happening, since some of the dances, although eye pleasing and well performed, I couldn't connect them to a particular anime, or to anime in general. The costumes were very cute, I really liked the school uniform costumes and the Naruto costumes and I think that it could not have suited the theme better. The choreography also put the costumes and other sets in full potential, which I thought was amazing, since when we perform dances, costumes are one of the last things to think about. ...read more.

it would have been supported the theme more if they had used more major soundtracks or the theme songs of the anime that people would recognize, because half the time, sitting with two other dance students, we were trying to figure out which anime it was, which distracted us from the actual performance. As a whole, I'm glad I watched the performance since I learned a lot, mostly about how technology can support a dance so well since I learned a lot about the performance and choreography of the dancing itself from other Dance Co or Advanced Dance performances before. I would recommend watching this so others, as I already have, because I am sure they will be amazed as I was, although maybe at different aspects. ...read more.