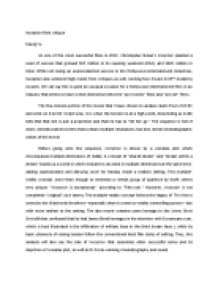 ﻿Inception final critique Seung Yu As one of the most successful films in 2010, Christopher Nolan?s Inception planted a seed of success that grossed $63 million in its opening weekend (USA), and $820 million in total. While not being an unprecedented success in the Hollywood entertainment industries, Inception also achieved high marks from critiques as well, earning four Oscars in 83rd Academy Awards. We can say this is quite an unusual occasion for a Hollywood entertainment film in an industry that seems to have a clear distinction between ?pro-money? films and ?pro-art? films. The five-minute portion of the movie that I have chosen to analyze starts from 2:07:43 and ends on 2:12:43. Script-wise, it is when the tension is at a high point, descending as Cobb tells Mal that she is just a projection and that he has to ?let her go.? The sequence is full of short, densely-packed scenes that contain multiple resolutions, but also reveal cinematographic values of the movie. Before going onto the sequence, Inception is driven by a complex plot which encompasses multiple dimensions of reality. A concept of ?shared dream? and ?dream within a dream? builds up a world in which characters can exist in multiple dimensions at the same time, adding sophistication and allowing room for fantasy inside a realistic setting. ...read more.

In addition, the shoulder-to-shoulder shot used in this scene slyly leaves Ariadne and Fischer out of the audience?s attention in order to make the audience believe that Cobb is completely vulnerable to Mal?s knife. Mal does stab Cobb, and Ariadne shoots Mal. Despite her intervention to the conflict between Cobb and Mal, the background of Ariadne when she is shot on screen?which is a large window with gray buildings outside?creates a visible distinction between the red, wooden interior of the house. This serves as an implication, saying that the conflict is between Cobb and Mal, and Cobb and Mal only. Confirming this implication, Cobb moves over to Mal?s side, which makes all shots showing Cobb to show the background of the house, unlike the previous scene that showed his conflict with his wife. This shows that his inner conflict is over and establishes a relaxed atmosphere. This is reinforced by the quieting of the sound. On the other hand, Ariadne?s conflict of saving Cobb is also resolved, as her name implies that her role is to help Cobb out of the ?labyrinth?, which turns out to be his guilt for Mal. While Cobb?s inner conflict is resolved, the team?s mission is still at its Everest of tension in this sequence. ...read more.

Fischer?s goal of being ?incepted??although he is unaware of it?is achieved, and the scene changes on. After the resolution of Cobb, Ariadne, Adam and Fischer?s individual conflicts or goals, the scenes cut using short timing and slow-motion. The slow motion heavily emphasizes the tension in the scenes, which is the resolution of the collective conflicts of the team. The shot shortly shows the dropping van with its cold, bluish colors, Ariadne dropping with the gray background behind her and Fischer with his black and white background, interweaving multiple layers by using short scenes. The characters begin to wake up, and the close-up scene stitches all of them together. The scene finally shows the van dropped into the water, an implication that the conflict has been resolved. The music, which gradually changes from the Edith Piaf?s song to a series of deafening ?bangs,? brings the scenes together with the reminder that they are all separate realities. This music then becomes quiet as the van finally drops, and the slow-motion is finally stopped. With this ends the sequence. Overall, all the aspects of Inception are clearly emphasized and depicted in this sequence with its complexity of plot and how the movie brings the conflicts together, along with the use of cinematography and sound to help this process. Also, the aspects of inception that connects the film to other works in the pasts were explored. With these techniques, Nolan was able to perform a billion-dollar inception on the audience. ...read more.