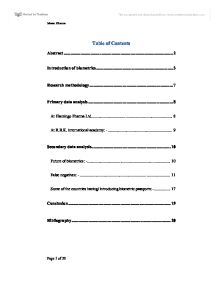 Table of Contents Abstract 2 Introduction of biometrics 3 Research methodology 7 Primary data analysis 8 At Flamingo Pharma Ltd. 8 At R.B.K. international academy: - 9 Secondary data analysis 10 Future of biometrics: - 10 False negatives: - 11 Some of the countries having/ introducing biometric passports:- 17 Conclusion 18 Bibliography 20 Abstract Technology is increasing day by day. Biometrics is becoming famous and there are users increasing. Though it has its advantages and disadvantages and there are several ethical and social issues that need to deal with. The scope of the research includes all aspect of biometrics. An overview on what biometrics is and will it be a method of authentication in the future. It focuses on the impact of the issue related to biometrics. The research section includes primary data and secondary data. In the primary data, the interviews were taken in a company and in school. In Flamingo Pharma and R.B.K International Academy, biometric devices are used for attendance. For further investigation secondary data was collected from books and Internet and were compiled. In secondary data the pros and cons are discussed the laws and the religious objections are discussed. The laws of every company is related to it is looked into and both data are analyzed. In the conclusion the research is summarized and discussed whether biometrics has gained universal acceptance or no. Introduction of biometrics What is biometrics? Biometrics is used to identify individuals based on the fingerprint, retina, face etc. Biometrics characteristics can be divided into two groups: - * Physiological- i.e. fingerprint, DNA, iris recognition etc. * Behavioral- i.e. behavior of a person like the voice, typing rhythm. These devices are used in offices, crime branch, school etc. at many places biometric devices are used as a way of authentication taking daily attendance. They are also used in crime branch as it helps in recognition and it is hard to mimic it. ...read more.

If the tolerance level is configured very lose, you can virtually eliminate false negatives at the cost of greatly increasing false positives. The accuracy rate is also heavily influenced by how many possible fingerprints matches the system has to be considered. The accuracy rate is also heavily influenced by how many possible fingerprint matches the system has to consider. If the system has to match your scan against a large database of enrolled fingerprints it's far more likely to come up with a false positive and somewhat more likely to come up with a false negative Many modern systems avoid this problem by matching your fingerprint against only one possible user - the user stored in your card or other credential - so the chances of a false positive are very low because someone trying to trick the system can't just match 'anyone's' fingerprint, they have to match 'your' fingerprint. Also, the match tolerance can be set very high thereby further reducing the chances of a false positive but increasing the chances of a false negative. (Future Lab) So you can virtually eliminate the false, but doesn't the relatively high false negative rate mean that legitimate users will be frequently locked out? Not necessarily; it depends on the penalty for getting a false negative. In most physical access and IT applications, if you get a false negative, you just have to scan your finger a second time so a high false-negative rate is an inconvenience, not a security issue. Let's say it takes you 2 seconds to scan your finger and the false negative error rate is 5%. Most of the time (95%) access is granted in two seconds. Most of the rest of the time (99.75%) you'll get in with two swipes and four seconds. Every 400 tries or so, you'll have to wait six seconds. For applications that don't heavily penalize users for false negatives, biometric systems can usually be tuned to an acceptably high level of accuracy. ...read more.

Pakistan: - Introduced in 2004 and NADRA has issued more than 7 million passports (Wikipedia.org). The United Kingdom: - Introduced in 2006 and is available (Wikipedia.org). Austria: - Available since June 16th, 2006 (Wikipedia.org). Germany: - Available since November 2005 (Wikipedia.org). Poland: - Available since 28 August 2006 (Wikipedia.org). Turkmenistan: - Turkmenistan became the first country in ex-USSR mid- Asia region to issue ICAO compliant biometric passport. Passport is available since 10 July 2008 (Wikipedia.org). Conclusion As we have seen that biometrics technology is used in many places and is getting recognized amongst many people. It is becoming very popular and many of the workplaces, schools, and police departments use it for various purposes. Now-a-days most of the laptops also come with a inbuilt device such as fingerprint and retina scanner. Such devices are used for security purposes to unlock particular devices. Such technology is rapidly increasing and is being added to mobile phones, PDA's etc. the typed passwords used to unlock a device are being replaced by these devices. It becomes much easier and many a times a user could possibly forget the password by in the case of biometrics that is not possible. The option of a biometric device for security is much safer compared to keys and locks. The locks could be broken into and duplicate keys of the lock could be made and misused, where as in these devices it is not possible to mimic it and needs proper authentication. There are many disadvantages of these devices and many social and ethical issues that need to be resolved. Many of the users have a fear of disease and the laws of every country are different. Many users don't feel secure if their data i.e. fingerprints etc. is saved on to the database. There are even a few religious objections existing that need to be resolved. Due to rapid growth in usage of these devices and user-friendly features, the usage of it is increasing day-by-day. And it is expected to gain more importance and will gain user acceptance in the near future gradually. ...read more.