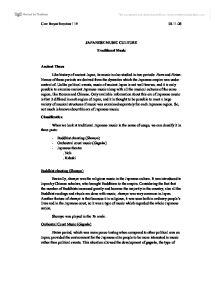 JAPANESE MUSIC CULTURE Traditional Music Ancient Times Like history of ancient Japan, its music is also studied in two periods: Nara and Heian. Names of these periods are derived from the dynasties which the Japanese empire was under control of. Unlike political events, music of ancient Japan is not well-known, and it is only possible to examine ancient Japanese music along with all the musical cultures of the same region, like Korean and Chinese. Only available information about this era of Japanese music is that it differed in each region of Japan, and it is thought to be possible to meet a large variety of musical structures if music was examined separately for each Japanese region. So, not much is known about this era of Japanese music. Classification When we look at traditional Japanese music in the sense of usage, we can classify it in three parts: - Buddhist chanting (Shomyo) - Orchestral court music (Gagaku) - Japanese theatre . Noh . Kabuki Buddhist chanting (Shomyo) ...read more.

It was only to be played along with dance or pantomime, which made it even more elegant. As the importance of gagaku became greater, certain initiatives were taken in order to organize the performance of gagaku. This was majorly done by an Imperial department in the palace, the gagaku department, whose task was to train musicians and separate gagaku even more than other traditional music types. Like shomyo, gagaku was also played in Yo scale. Japanese Theatre Music was an essential part of Japanese theatre, because every play would be presented with music. There are two main parts of traditional Japanese theatre, which are noh, indigenous Japanese theatre, and kabuki. Noh: It is the traditional Japanese theatre, a rather simpler form of kabuki. An orchestra of flutes, drums, and vocals would accompany an act of noh. Kabuki: Kabuki is a more widely-known form of Japanese theatre. Unlike noh, kabuki's orchestra is much larger than a noh's, using similar instruments. ...read more.

y� (fifth note) The reason for interchanging the positions of 1st and 3rd notes is that unlike western pentatonic scales which are named based on their 1st note in the scale, Japanese pentatonic scale is named based on its 3rd note. Yo Scale The Yo scale is a common form of pentatonic scale in the Japanese traditional music. It is used mostly in shomyo and kabuki. The notes for the Yo scale are as follows: Instruments Traditional Japanese music uses a large variety of instruments. * * Biwa * Hichiriki * Hocchiku * Hyoshigi * Kane * Kakko * Kokyu * Koto * Niko * Okawa * Ryuteki * Sanshin * Shakuhachi * Shamisen * Shime-Daiko * Shinobue * Sho * Suikinkutsu * Taiko * Tsuzumi Here are brief descriptions for the instruments used in Japanese traditional music. Biwa: a short lute Shamisen: string instrument, very widely used Ryuteki: a small flute Hichiriki: similar to oboe, double reeded Horagai: horn, made of sea shell Kokyu: bowed string, only example of the kind Taiko: drums, played in groups ?? ?? ?? ?? Can Baser Baydier 11H 25.11.08 ...read more.