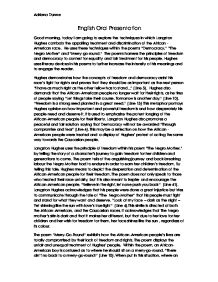 English Oral Presentation Good morning, today i am going to explore the techniques in which Langston Hughes combats the appalling treatment and discrimination of the African-American race. He uses these techniques within the poems "Democracy," "The Negro Mother" and "Merry-go-round." The poems harness the principles of freedom and democracy to contest for equality and fair treatment for his people. Hughes uses literary devices in his poems to further increase the intensity of his meanings and to engage the reader. Hughes demonstrates how the concepts of freedom and democracy assist his race's fight for rights and proves that they should be as important as the next person "I have as much right as the other fellow has to stand..." ...read more.

Langston Hughes uses the principle of freedom within his poem "The Negro Mother," by telling the story of a character's journey to gain freedom for her children and generations to come. The poem tells of the anguishing journey and back-breaking labour the Negro Mother had to endure in order to earn her children's freedom. By telling this tale, Hughes means to depict the desperation and determination of the African-American people for their freedom. The poem does not only speak to those who treated their race unfairly, but it is also meant to inspire and encourage the African-American people. "Believe in the right, let none push you back" (Line 41). Langston Hughes acknowledges that his people were done a great injustice but tries to communicate through the tale of "The Negro Mother" that his people must fight and stand for what they want and deserve. ...read more.

(Line 10). When put in this situation, where an African-American boy would be equal to a Caucasian one, the boy has nowhere to sit. This symbolises that, while abiding by the Jim Crow Law, African-American and Caucasian people could never be equal, and that abiding by that law would mean that Hughes' race had to compromise many aspects of their lives. Langston Hughes uses the values of democracy and freedom to fight for his people's liberty and for their right for equality. Through his poems, he illustrates the injustice of the discrimination and oppression of his people. He did this in the hope that he would inspire and evoke change so that it might bring on a better life for the African-American race. ?? ?? ?? ?? Adriana Dunne ...read more.