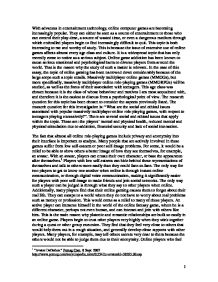 With advances in entertainment technology, online computer games are becoming increasingly popular. They can either be seen as a source of entertainment to those who can control their play-time, a source of wasted time, or even a dangerous medium through which enthralled players begin to find increasingly difficult to quit. This topic is both interesting to me and worthy of study. This is because the issue of extensive use of online games affects almost every age class and culture. It is a widespread topic that has only recently come to notice as a serious subject. Online game addiction has been known to cause serious emotional and psychological harm to diverse players from around the world. That is the reason why the study of such a matter is relevant. In the case of this essay, the topic of online gaming has been narrowed down considerably because of the large scope such a topic entails. Massively multiplayer online games (MMOGs), but more specifically, massively multiplayer online role-playing games (MMORPGs) will be studied, as well as the focus of their association with teenagers. This age class was chosen because it is the class of whose behaviour and motives I am most acquainted with, and therefore it is the easiest to discuss from a psychological point of view. The research question for this topic has been chosen to consider the aspects previously listed. The research question for this investigation is: "What are the social and ethical issues associated with popular massively multiplayer online role-playing games, with respect to teenagers playing excessively?". There are several social and ethical issues that apply within the topic. These are: the players' mental and physical health, reduced mental and physical stimulation due to addiction, financial security and lack of social interaction. The fact that almost all online role-playing games include privacy and anonymity into their interface is important to analyze. Many people that are actively involved in these games suffer from low self-esteem or poor self-image problems. ...read more.

After five hours, players will be warned that their in-game benefits will be cut down to zero and their avatar's health will be damaged if they continue to remain online. The most popular online games agreed to the playing curbs; although they did not have much choice as they need the government's support to offer online games. However, many critics and moderate online players feel that the system is not enough. This is because of the significant loopholes in the regulations. Players can just play until their time is up and then switch characters to another profile.8 This is feasible for the large number of addicted Chinese players. Control of online video game addiction is essential for many caught up in the games. Many extreme cases of violence have occurred because the players were addicted to the games. For example, one child whose gameplay was interrupted by his little brother proceeded to kill his younger sibling with a hammer because he had interrupted his game play.9 One man, Shawn Woolley, shot himself to death after a tragic loss occurred in his game.10 These are not isolated cases. Reports of video game violence are frequent and are far from over. There are many reasons why players may resort to such extremes. Online games, perhaps, in their violent gameplay, may confuse players about the consequences of killing and death. Since addicted players tend to spend so much time away from reality and their friends and family, they may begin to forget about how important these people are to them, and when they become isolated from their games they lose sight of what to do and how to respond to others. One psychologist from Stockton became so wrapped up in the game in trying to study it, that he frequently entered all-night sessions with the game before forcing himself to quit.11 He says, "Here I was in a good position to understand the problem...and yet I really did have to struggle to beat this thing... ...read more.