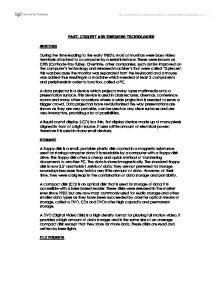 Past, Current And Emerging Technologies

Past, Current and Emerging Technologies MONITORS During the time leading to the early 1980's, most of monitors were boxy video terminals attached to a computer by a serial interface. These were known as CRTs (Cathode Ray Tube). Overtime, other companies, such as IBM improved on the computer's technology and released machine's that were called "3 pieces", this was because the monitor was separated from the keyboard and a mouse was added thus resulting in a machine which needed at least 3 components and peripherals in order to function, called a PC. A data projector is a device which projects many types multimedia onto a presentation surface. This device is used in class lectures, cinemas, conference rooms and many other occasions where a wide projection is needed to serve a bigger crowd. ...read more.

However, at their time, they were a big leap in the combination of data storage and portability. A compact disk (CD) is an optical disk that is used for storage of data; it is accessible with a laser-based reader. These disks were released in the market ever since 1982, but are now most commonly used for Audio storage and other smaller data types as they have been succeeded by a better optical means of storage, called a DVD. CDs and DVDs offer high capacity and permanent storage. A DVD (Digital Video Disk) is a high density format for playing full motion video. It provides a high amount of data storage and is the same size of an average compact disk except that they store far more data. ...read more.

JPEG is a commonly used method of compression for photographic images. The compression level of JPEG images can be adjusted to suit the desired file size (Which is normally a tenth of the original image size) or image quality (Which is lossless most of the time, and looks as if uncompressed). This file format has gone a long way in the reduction of data transmission; it now allows users to browse websites much quicker, with less loading times. It also means that people can store more images on the same storage device, providing faster back up. JPEGs are a reader-friendly format, meaning that most of the devices used today to view images are able to read this file format. Unlike some copyrighted file types, most computers can open and view ".jpg" picture files without having to install other software to be able to view the file. Mohamad Naji ...read more.