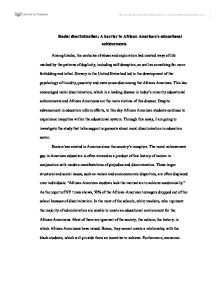 Racial discrimination: A barrier in African American's educational achievements Among blacks, the centuries of abuse and exploration had created ways of life marked by the patterns of duplicity, including self-deception, as well as something far more forbidding and lethal. Slavery in the United States had led to the development of the psychology of timidity, passivity and even cowardice among the African American. This has encouraged racial discrimination, which is a leading disease in today's minority educational achievements and African Americans are the main victims of this disease. Despite advancement in education reform efforts, to this day African American students continue to experience inequities within the educational system. ...read more.

Most of them are ignorant of the society, the culture, the history, in which African Americans have raised. Hence, they cannot create a relationship with the black students, which will provide them an incentive to achieve. Furthermore, economic background of family, absence of educated parents, the early responsibly of earning the bread for family are the main reasons for this problem. This trend of academic underachievement in the African American community is becoming the leading problem. The achievement gap developed because African American students have systematically been taught not to value the American education system and the knowledge that results from advancement through it. It is hard for them to value an education system that has resulted in the slavery of their society. ...read more.

Therefore, it's not really surprising after reading the article 'More African American male are in jail rather than colleges'. African Americans are still facing inequalities in education, even after 60 years of civil movement; which is affecting their educational achievements negatively. This problem of displacing social and economic societal realities onto individuals' substitutes one cause of the achievement gap with another instead of recognizing both. Recognizing that racism exists and it has a powerful impact on education is the first step to eliminating the achievement gap. Secondly, an intervention must be developed to remedy disconnection between common African American interpretations of racism and reactions that are conducive to academic success. If we work on this problem together, I hope it won't take too long to do so. ...read more.