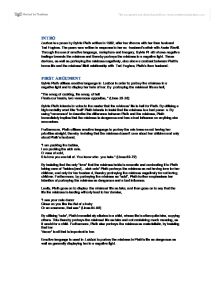 Furthermore, by suggesting that the mistress is "sucking" it implies that it is making Plath "exhausted" and that the illicit relationship is hurting her. "Sucking" is also combined with "blood-loving bat" to essentially portray the mistress as a blood-sucking bat, which is an allusion to Vampires and other fantasy creatures, which don't exist. By portraying the mistress as a Vampire, Plath essentially makes her unworthy of humanity, which therefore demeans the mistress and portrays her in a highly negative light. CONCLUSION In conclusion, the use of emotive languages, metaphors as well as imagery all contribute to Plath's intention of portraying the mistress in a highly negative light and emphasising her hate of her. Emotive language is mainly used in Lesbos to say that the mistress' life is not right and what she does is not right, in contrast to Plath's. Metaphors are used to degrade the mistress and give her inhumane characteristics; it is also used to portray the mistress as a prostitute. Lastly, imagery is vastly utilised in Lesbos to contrast the mistress' life of infidelity to Plath's life of taking care of children and doing motherly things, as well as giving the mistress inhumane characteristics and making her unworthy of humanity, which thereby insults and demeans her. All of these devices emphasise Sylvia Plath's hate of the mistress and essentially give's Plath a chance to voice her opinions regarding illicit relationship and extra-marital affairs. ...read more.