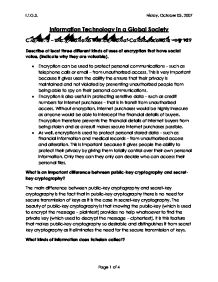 Information Technology in a Global Society Chapter 3 - Encryption and Interception of Communications - Pg 129 Describe at least three different kinds of uses of encryption that have social value. (Indicate why they are valuable). * Encryption can be used to protect personal communications - such as telephone calls or email - from unauthorized access. This is very important because it gives users the ability the ensure that their privacy is maintained and not violated by preventing unauthorized people from being able to spy on their personal communications. * Encryption is also useful in protecting sensitive data - such as credit numbers for internet purchases - that is in transit from unauthorized access. Without encryption, internet purchases would be highly insecure as anyone would be able to intercept the financial details of buyers. Encryption therefore prevents the financial details of internet buyers from being stolen and as a result makes secure internet purchases possible. * As well, encryption is used to protect personal stored data - such as financial information and medical records - from unauthorized access and alteration. This is important because it gives people the ability to protect their privacy by giving them totally control over their own personal information. ...read more.

were already available freely on the Internet so anyone who wanted to - including terrorists - could use them to secure their communications. What are some reasons why a business might choose to use a private system to escrow encryption keys? The main reason as to why a business might choose to use a private escrow system is because with a commercial (public) key escrow system, law-enforcement agencies would be able - through a court order / search warrant - to gain access to the keys that would decrypt the encrypted data. Thus, by using an in-house (private) system to escrow encryption keys, businesses can have the confidence their encrypted data is secure and only authorized personnel can access it. What were some of the communications censored by the U.S. government during World War II? During World War II, the U.S. government employed a work-force of almost 15,000 people to open mail (in the range of about a million copies a day) being sent overseas and eliminate any that contained sensitive military information that would be of use to the then enemies Germany or Japan. Furthermore, people's telephone conversations were spied upon in addition to any form of communication that could be used to transmit sensitive military information to enemies. ...read more.

They fear that the FBI's carnivore system doesn't provide sufficient protection to guard against violations of user's privacy. Furthermore, potential incompatibilities of the system with the ISP can cause service inconvenient service interrupts at ISPs. Give similarities and differences between requirements to register our cars and requirements to register our encryption keys Digital cash can be designed to allow transactions to be made securely and anonymous. Considering the privacy benefits and potential for use by tax evaders and criminals, do you think fully anonymous digital cash should be made illegal? Give your reasons. In my opinion, fully anonymous digital cash should not be made illegal even though it can at times be used criminals and tax evaders. The main reason for this is because anonymous digital cash protects the privacy of the consumer and this benefit only outweighs any potential abuse by malicious people. Consider commercial key recovery, described in Section 3.4.2. Give some arguments in favor of requiring by law that all business users of encryption use a key recovery system approved by the government. Give some arguments against such a requirement. Reasons to support the use of a pub Critics argue that by giving the government backup copies of all encryption keys used by business, the system is open to possible abuse by the government as it has total control. ?? ?? ?? ?? I.T.G.S. Friday, October 05, 2007 Page 1 of 4 ...read more.