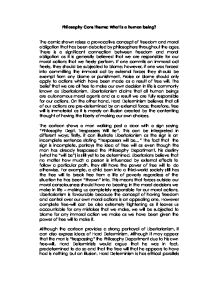 What is a human being?

Philosophy Core Theme: What is a human being? The comic shown raises a provocative concept of freedom and moral obligation that has been debated by philosophers throughout the ages. There is a significant connection between freedom and moral obligation as it is generally believed that we are responsible for our moral actions that we freely perform. If one commits an immoral act freely, they should be subjected to blame; however, if one was forced into committing the immoral act by external forces they should be exempt from any blame or punishment. Praise or blame should only apply to actions which have been made as a result of free will. The belief that we are all free to make our own decision in life is commonly known as Libertarianism. Libertarianism claims that all human beings are autonomous moral agents and as a result we are fully responsible for our actions. On the other hand, Hard Determinism believes that all of our actions are pre-determined by an external force; therefore, free will is immaterial as it is merely an illusion created by the contenting thought of having the liberty of making our own choices. ...read more.

Libertarianism is favourable because the concept of having freedom and control over our own moral actions is an appealing one. However complete free-will can be also extremely frightening as it leaves us accountable for any mistakes that we make, we will be subjected to blame for any immoral action we make as we have been given the power of free will to make it. Although the cartoon provides a strong portrayal of Libertarianism, it can also express ideas of Hard Determinism. Although it may appear that the man is "trespassing" the Philosophy Department due to his own free-will, Hard Determinists would argue that he was in fact, predetermined to do so and that the free will that he appears to have had is nothing but an illusion. Hard Determinism is has ethical parallels with the idea of predestination - an idea originating in St Paul's letter to the Romans that God has already chosen beforehand who will be saved and who will be condemned. John Calvin - a protestant reformer- described predestination as "the eternal decree of God... ...read more.

The major criticism of Hard Determinism is that because everything we do is predetermined, we cannot be responsible for any immoral actions that we make as it is not our fault. This leaves people with the ability to justify anything as they can claim it was always going to happen. Considering both sides of the argument, it is evident that the most logical and realistic idea would be a middle ground between the two extreme views. I believe that although Libertarianism an appealing ethos, disregarding all external and predetermined values would be irrational. There should be an extent to which free will is not applicable and instead take into account some aspects of human beings that are determined. For instance genetics, socio-economic, backgrounds, religio-cultural backgrounds and experience of life are all aspects which can affect the outcome of a person's decisions, the idea of taking into account both predetermined aspects and free will is known as Soft Determinism. Soft Determinism makes free will and Determinism compatible by considering that some actions are freely made while others are conditioned by causes which are unavoidable. ...read more.