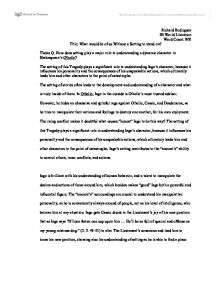 What would be of us Without a Setting to stand on?

(3. 3. 468) knowing how to pace his speech and convince Othello of everything. The "ancient's" ability in combination to a convenient setting where he is surrounded by trustful and ignorant people allows him symbolically to perform a puppet show throughout the play. Iago despites his situation and the other characters in the play, and enjoys making them suffer; internal conflicts, which "Good" Iago's setting, historically, helps, develop understanding of. First, comes the time period of the and location of the play, Venice and mostly the island of Cyprus, during Shakespeare's times. Unlike most characters in Shakespeare's plays, Iago is not as rich and he confirms it when he requests Roderigo to "Put enough in your purse" (1.1.423) describing how he lacks to fund his plot against Cassio and Othello. However, he lives surrounded by the elite and most powerful men, in one of the wealthiest cities old Europe of that time. This setting demonstrates how Iago despites his situation as he says "I know my price and, I am worth no worse a place." ...read more.

1. 18-20) in a way to evade any suspects towards the "honest" man while he tries to backstab them. However, the "ancient's" setting contributes also to his breaking point, as his plot against Othello reaches its climax. It is in Othello rage against Desdemona that Iago starts loosing some control of his plot, as he is threatened by Othello with death if he discovered it was all false, causing Iago to become obsessioned for control and power over others due to this stress. Necessity forces the "ancient", in order to destroy Othello, to destroy also Roderigo, Desdemona, and ultimately himself. The setting influences Iago's actions because it enables him to attack other characters, and ultimately destroy them all. One's setting is influential to our behavior, and our actions. In most cases our will reflect from our setting. However, in Iago's case, the joyful setting of winning over the Turks, and Othello's marriage with Desdemona, provoked him to manipulate other characters and lead them to their doom thus it then becomes an obsession that also destroys him. To understand other people's environment ultimately leads us to understand and predict the actions of those who live in it seeking for their inner equilibrium. ...read more.