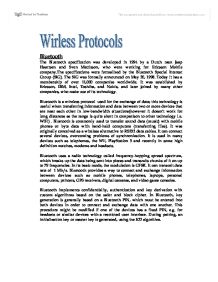 Bluetooth The Bluetooth specification was developed in 1994 by a Dutch man Jaap Haartsen and Sven Mattisson, who were working for Ericsson Mobile company.The specifications were formalized by the Bluetooth Special Interest Group (SIG). The SIG was formally announced on May 20, 1998. Today it has a membership of over 11,000 companies worldwide. It was established by Ericsson, IBM, Intel, Toshiba, and Nokia, and later joined by many other companies, who make use of its technology. Bluetooth is a wireless protocol used for the exchange of data; this technology is useful when transferring information and data between two or more devices that are near each other in low-bandwidth situations(however it doesn't work for long distances as the range is quite short in comparison to other technology i.e. WiFi) . Bluetooth is commonly used to transfer sound data (music) with mobile phones or byte data with hand-held computers (transferring files). ...read more.

for headsets or similar devices with a restricted user interface. During pairing, an initialization key or master key is generated, using the E22 algorithm. WiMax WiMax (Worldwide Interoperability for Microwave Access), is a telecommunications technology that provides wireless transmission and exchange of data using a variety of transmission modes. The technology provides up to 75 Mbit/s symmetric broadband speeds without the need for any cables, which makes it easy and user friendly. The technology is based on Broadband Wireless Access. WiMAX is a term which describes standard, interoperable implementations of IEEE 802.16 wireless networks. The WiMAX Forum has defined an architecture that defines how a WiMAX network connects with other networks, and a variety of other aspects of operating such a network, including address allocation, authentication, etc. * SS/MS: the Subscriber Station/Mobile Station * ASN: the Access Service Network * BS: Base station, part of the ASN * ASN-GW: the ASN Gateway, part of the ASN * CSN: the Connectivity Service Network * HA: Home Agent, part ...read more.

Wi-Fi technology has served to set up mesh network. It can also be use for data exchange and to play muli-player games through a WiFi connection. The most common wireless encryption standard, Wired Equivalent Privacy or WEP, has been shown to be easily penetrable even when correctly configured. Wi-Fi Protected Access (WPA and WPA2), which began shipping in 2003, aims to solve this problem and is now available on most products. Wi-Fi Access Points typically default to an "open" (encryption-free) mode. Novice user's benefit from a zero-configuration device that works out of the box, but this default is without any wireless security enabled, providing open wireless access to their LAN. To turn security on requires the user to configure the device. Wi-Fi networks that are open can be monitored and used to read and copy data (including personal information) transmitted over the network, unless another security method is used to secure the data, such as a VPN or a secure web page. Word Count: 823 Sources: www.wikipidea.org ?? ?? ?? ?? ...read more.