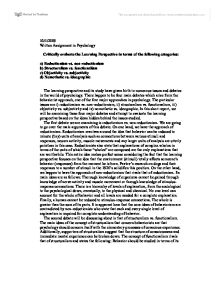 Critically evaluate the Learning Perspective in terms of the following categories: a) Reductionism vs. non-reductionism b) Structuralism vs. functionalism c) Objectivity vs. subjectivity d) Nomothetic vs. ideographic

10/1/2009 Written Assignment in Psychology Critically evaluate the Learning Perspective in terms of the following categories: a) Reductionism vs. non-reductionism b) Structuralism vs. functionalism c) Objectivity vs. subjectivity d) Nomothetic vs. ideographic The learning perspective and its study have given birth to numerous issues and debates in the world of psychology. There happen to be four main debates which arise from the behaviorist approach, one of the five major approaches in psychology. The particular issues are i) reductionism vs. non-reductionism, ii) structuralism vs. functionalism, iii) objectivity vs. subjectivity and iv) nomothetic vs. ideographic. In this short report, we will be examining these four major debates and attempt to evaluate the learning perspective based on the ideas hidden behind the issues studied. The first debate we are examining is reductionism vs. non-reductionism. We are going to go over the main arguments of this debate. On one hand, we have the approach of reductionism. Reductionism revolves around the idea that behavior can be reduced to minute (tiny) ...read more.

Additionally, supporters of structuralism suggest that the structure of consciousness and immediate mental experience can be broken down. The concept of functionalism rivals that of structuralism and states the following: Behavior should be studied in terms of its functional value (what the behavior is for) in adapting the person or animal to its environment. The concept is actually based on Charles Darwin's ideas of evolution in species, ideas that would later on influence behaviorism heavily. Furthermore, functionalism suggests that the primary function of consciousness is to enable humans to behave in ways in which will aid survival through adaptation to the environment. Behaviorists generally agree with the belief that behavior has a functional value. However, they disagree with the possibility sensations and feelings being elements of conscious experience, an idea present in structuralism, as well as with the use of introspection as a way to investigate these conscious experiments. We are now moving on to our third debate which happens to be that of objectivity vs. ...read more.

Individuality is not considered important. On the contrary, the ideographic states that research addresses the wholeness and uniqueness of the individual. Its target is to provide a complete and in-depth picture of the individual. Generalisability and predictability of findings are of no importance. Once again, it is apparent that the ideas of the nomothetic feature greatly in behaviorism, considering the research conducted by psychologists such as Pavlov and Skinner on animal subjects. These experiments helped to develop specific theories like those of operant and classical conditioning. The father of behaviorism himself, J.B. Watson, stated that the objective of learning psychology is to arrive at laws that govern human behavior and can help in controlling it. Having made an attempt to critically evaluate the learning perspective based on a number of major debates in psychology, I can safely state the belief that a number of concepts that actually spawn from the learning perspective itself, including reductionism, structuralism, objectivity and the nomothetic, form the basis of those major debates and provide us with the opportunity to understand the entire concept of behaviorism much more smoothly. ...read more.