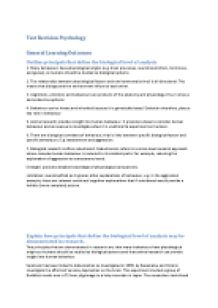 ﻿Test Revision Psychology General Learning Outcomes Outline principals that define the biological level of analysis 1. Many behaviours have physiological origins (e.g. brain processes, neurotransmitters, hormones, and genes), so humans should be studied as biological systems 2. The relationship between physiological factors and environmental stimuli is bi-directional. This means that biology and the environment influence each other. 3. Cognitions, emotions and behaviours are products of the anatomy and physiology of our nervous and endocrine systems. 4. Behaviour can be innate and inherited because it is genetically based. Evolution therefore, plays a key role in behaviour. 5. Animal research provides insight into human behaviour. It provides a base to consider human behaviour and an avenue to investigate when it is unethical to experiment on humans. 6. There are biological correlates of behaviour, that is links between specific biological factors and specific behaviours. E.g. testosterone and aggression. 7. Biological research is often reductionist. Reductionism refers to a micro-level research approach where complex human behaviour is reduced to its smallest parts. For example, reducing the explanation of aggression to testosterone levels. Strength: provides detailed knowledge of physiological components. Limitation: oversimplified as it ignores other explanations of behaviour, e.g. in the aggression example, there are relevant social and cognitive explanations that if considered would provide a holistic (more complete) picture. Explain how principals that define the biological level of analysis may be demonstrated in research. Two principles that are demonstrated in research are: that many behaviours have physiological origins so humans should be studied as biological systems and that animal research can provide insight into human behaviour. Serotonin has been linked to hallucination as investigated in 1999, by Kasamatsu and Hirai to investigate the effects of sensory deprivation on the brain. This experiment studied a group of Buddhist monks over a 72 hour pilgrimage to a holy mountain in Japan. The researchers took blood samples before the monks ascended the mountain. ...read more.

Participants were given a drug which lowers levels of noradrenalin called physostigmine. The results came very quickly, the experimenters observed that within minutes of taking the drug, the participants experienced self-hate and suicidal ideation, and their mood also became depressed. They concluded that depression may occur from the disturbance of noradrenalin levels. The research was supported by effective drug therapies that work to increase noradrenalin levels in depressed patients. The downfall to this experiment was that the research did not actually state if depression caused changes in the neurotransmitter levels, or if the changes in NT levels caused the depression. Serotonin and Hallucination In 1999, Kasamatsu and Hirai investigated the effects of sensory deprivation on the brain. This experiment studied a group of Buddhist monks over a 72 hour pilgrimage to a holy mountain in Japan. The researchers took blood samples before the monks ascended the mountain. The monks were exposed to the harsh autumn weather, did not speak or consume water or food. After approximately 48 hours, the monks began to hallucinate claiming that they saw ancient ancestors or they felt their presence. Immediately, blood tests were taken and stated that serotonin levels increased. They concluded that sensory deprivation triggered the release of serotonin. Increased serotonin activates the hypothalamus and frontal cortex which results in hallucination. Using one or more examples, explain functions of two hormones in human behaviour Hormones Hormones are a class of chemicals that affect behaviour. They are similar to neurotransmitters but hormones act over much longer distances. The endocrine system consists of glands that produce and secrete hormones which travel through the bloodstream to target cells to alter behaviour, & are therefore slower-acting than neurotransmitters. Melatonin and Sleep An example of a hormone produced in the pineal gland is melatonin. This hormone is stimulated by darkness and inhibited by light. Or in other words, melatonin levels peak in the middle of the night and decrease during the day. ...read more.

who were NGRI to 41 other controls. NGRIs suffered Schizophrenia, head injury, organic damage, drug abuse, affective disorder, epilepsy, hyperactivity, learning difficulties and personality disorders. The average age of NGRIs was 34.3 years old. They were all medication free, same diagnosis, had to undertake scans of mental and physical health and same gender. NGRIs compared their right and left hemispheres in 14 areas to the controls. They were compared in 6 cortical areas and 8 subcortical areas. The cortical areas were: lateral prefrontal, media prefrontal, parietal, occipital, temporal and cingulated. The subcortical areas were: corpus callosum, amygdale, media temporal lobe hippocampus, thalamus, putamen, globus palldius, midbrain, and the cerebellum. The results showed that NGRIs less activity in prefrontal and parietal areas, more activity in occipital areas, no difference in temporal, less activity in the corpus callosum, imbalance of activity between the two hemispheres and the thalamus had more activity in the right side. NGRIs had less activity in the left side and more on the right side In conclusion, the experimenters could find treatments for violent people, the experiment may have caused ethical dilemmas and the NGRIs might have murdered someone by poison, which may not be ?violent?. PET scans 1. Positron Emission Tomography 2. 1950 3. Monitors glucose metabolism(life) in the brain 4. Glucose accumulates in metabolically (lively) active areas of the brain 5. Injected with Harmless Radioactive glucose = emits positrons 6. Radioactive particles are picked up on the PET scan 7. Produces coloured 3D maps of the active parts of the brain 8. + Diagnoses tumors 9. + Can compare from normal to abnormal brains 10. + Records ongoing activity in the brain 11. + Non-invasive 12. - Rapid decay of the radioactive glucose must be monitored MRI scans 1. Functional Magnetic Resonance Imaging 2. 1980 3. Uses magnetic fields and radio waves 4. Shows actual brain activity 5. 3D image 6. Large magnet creates a magnetic field around the patient?s head 7. The active neurons need oxygenated blood = Magnets detect the oxygen 8. +No radioactivity 9. +Simple and high resolution 10. -Magnetic field is very strong ...read more.