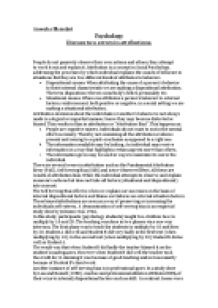 ﻿Aneesha Bhandari Psychology Discuss two errors in attributions. People do not passively observe their own actions and others, they attempt to work it out and explain it. Attribution is a concept in Social Psychology, addressing the processes by which individual explains the causes of behavior in situations. But they are two different kinds of attributes to behavior: 1. Dispositional causes: When attributing the cause of a person?s behavior to their internal characteristic we are making a dispositional attribution. The term disposition refers to somebody?s belief, personality etc. 2. Situational causes: When one attributes a person?s behavior to external factors, reinforcement, both positive or negative, in a social setting we are making a situational attribution. Attribution decisions about the individuals or another?s behavior is not always made in a logical or impartial manner, hence they may become distorted or biased. This results in Bias in attribution or ?Attribution Bias?. This happens as: 1. People are cognitive misers. Individuals do not want to out in the mental effort necessary. Thereby not examining all the attribution evidence present and coming to a quick conclusion as opposed to a right one. ...read more.

In the second test (when multiplying by 20) Student B did as well as Student A. The result was that when Student B did badly the teacher blamed it on the student?s inadequacies. However when Student B did well the teacher took the credit for it, claiming it was because of good teaching and not necessarily because of Student B?s hard work. Another instance of self-serving bias is in professional sport. In a study done by Lau and Russell (1980), coaches and professional athletes attributed 80% of their wins to internal/dispositional factors such as skill. In contrast, losses were attributed to external/ situational factors. A study done by Abramson et al. (1989), showed that depressed people attribute their success to external/situational factors and their failures to internal/dispositional factors. Miller and Ross (1975) argued that several instances of self-serving bias were rational and not for maintaining self esteem. They claimed that if trying harder did not enhance performance, then it could be concluded that there was an obstacle in the task. However if trying hard produces results then it is logical to attribute to ones self. ...read more.

Where as when writing about their best friends they made the same number of situational attributes as dispositional ones. For e.g. ? he majors in chemistry as he wants to make money.? The result of this experiment was that people tend to attribute their behavior to external causes, as they themselves are variables. However they attribute some else?s behavior to dispositional factors. When actors observe others behavior they lack adequate information and therefore rely more on Fundamental Attribution Error. But when observing one self-actors have more knowledge of intention, behavior and various situational factors. In a study done by Storm (1973) actors were made to see videotapes of their behavior in a particular situation. After seeing the video the actors made less situational attributions in comparison to the observers. Researchers have found that when actors know the observers well, they tend to succumb to bias less. This is, as they would know the motivation, needs and situation in the individual?s life. There fore the external factors that affect the behavior are accounted for In conclusion there are several errors in attribution including the ones mentioned above. Each of these errors are common in our daily life if not committed by us. Knowing these errors exist explains a great deal about human behavior and attribution. ...read more.