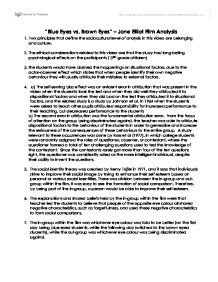 "Blue Eyes vs. Brown Eyes" - Jane Elliot Film Analysis 1. Two principles that define the sociocultural level of analysis in this video are belonging and culture. 2. The ethical considerations related to this video are that the study had long-lasting psychological effects on the participants ( 3RD grade children) 3. the students would have blamed the happenings on situational factors, due to the actor-observer effect which states that when people identify their own negative behaviour they will usually attribute their mistakes to external factors. 4. a) The self-serving bias effect was an evident error in attribution that was present in the video when the students took the test and when they did well they attributed it to dispositional factors and when they did bad on the test they attributed it to situational factors, and the related study is a study by Johnson et al. In 1964 when the students were asked to teach other pupils attributed responsibility for increased performance to their teaching, but decreased performance to the students b) The second error in attribution was the fundamental attribution error. From the focus of attention on the group being discriminated against, the teacher was able to attribute dispositional factors to the behaviour of the students in order to generalize and increase the seriousness of the consequences of these behaviours to the entire group. ...read more.

9. Stereotype threat and spotlight anxiety both occurred in the film while the children were taking part in various activities that tested their intellectual abilities. Stereotype threat occurred in the film when the children that were part of the out-group feared that they would do something wrong that would inadvertently confirm the stereotype that was held against them during the assessment. It was this self conscious behaviour that created spotlight anxiety when the pressure caused by the negative stereotypes undermined their ability to perform at their full potential. Within the study done by Steele and Aronson (1995) it was found that African American students would score significantly lower than European student when they believed that they were taking a test of their verbal abilities, while scoring significantly higher when they were taking the same test, but told it was a test of how general problems are solved. The study concluded that stereotypes can affect the performance of any cultural group if the members of the group believe in the stereotype. This is similar to the film, when the children come to believe that the stereotypical views of their group determine their true behaviour,. ...read more.

First of all, the children showed obedience to the teacher's views due to their acceptance of her being the more powerful individual within the classroom. Similarly, students immediately accepted the imbalance of power between the in-group and out-group. The second cultural dimension shown in the video was individualism, as the students were only concerned about their specific power. 15. To decrease hostility amongst children following the lesson, Ms. Elliot could have taken advantage of the social learning theory by rewarding students based on their kindness and punishing them otherwise. One a single student is rewarded, others will admire the positive consequences of their behaviour, and the student will act as a model for the rest of the class. On the contrary, when a student sees his peers being punished for their hostility, the likelihood that students will conform to that behaviour will decrease. 16. The similarities are that they both had a distinctive in-group and out-group and there was in-group bias and the differences were that the Robber's Cave study used only male samples, while within the film, both genders were considered an in the Robber's Cave experiment, boys were divided randomly based on no unifying characteristic, while in the film, groups were determined based on eye colour ...read more.