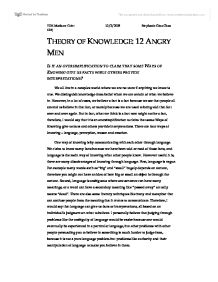 Another way of knowing is through perception of our five senses. Perception is essential because we can only know anything through perception, especially through our visual sense. However, we cannot simply take the evidence of our senses for granted, because they sometimes deceive us, as our eyes were made to manipulate what we see. (Chandler, n.d.) For example, the illusion picture on the right is a still picture; however, our eyes deceive us and think it is moving. Also, our perception is selective and can be distorted by our emotions and prejudices. A classic example is that "an optimist sees a glass as half-full, a pessimists sees the same glass as half-empty." (Lagemaat, 2005). Our emotions can strongly effect our perception. Memory is another selective perception: "Numerous studies have shown that the most vivid autobiographical memories tend to be of emotional events". (McPherson, 2004)As we can see, a lot of our senses and our own memory tend not to be reliable, therefore I would say that our perception can give us facts or interpretations, all based on an individual's judgment whether what they perceived is true or not. ...read more.

For example, Benny is picking his nose and our emotions tells us that it is disgusting or gross, when it might have been dirtier to touch a dog. Also, intuition is a way of knowing where it is a flash of creative insight. For example, we have a feeling that someone is staring at you at the back. Even if you are right, these intuitions do not seem reliable, and emotions often let us perceive the wrong information. Therefore, I would say that emotion is not a very reliable Way of Knowing, (Lagemaat, 2005) In general, I would say that it is an oversimplification to claim that some Ways of Knowing give us facts and others provide interpretations, because all ways of knowing has doubts. However, some ways of knowing is more certain and straightforward like others, like reasoning, because it is based on pure logic. Others like emotions are harder to perceive because those ways of knowing does not base on anything but pure gut feelings. So in general, all ways of knowing is an interpretation or fact depending on which we believe, but can be more certain on some other Ways of Knowing. ...read more.