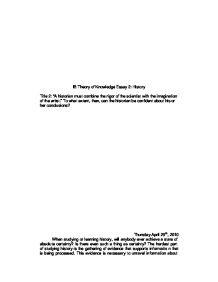 A historian must combine the rigor of the scientist with the imagination of the artist. To what extent, then, can the historian be confident about his or her conclusions?

IB Theory of Knowledge Essay 2: History Title 2: "A historian must combine the rigor of the scientist with the imagination of the artist." To what extent, then, can the historian be confident about his or her conclusions? Thursday April 29th, 2010 When studying or learning history, will anybody ever achieve a state of absolute certainty? Is there even such a thing as certainty? The hardest part of studying history is the gathering of evidence that supports information that is being processed. This evidence is necessary to unravel information about events that have occurred in the past. Evidence is ultimately the main factor that leads to the understanding and knowledge of the occurring of an event. It plays a role in the 'difficult aspect of studying history' because there is a question of reliability and credibility of the piece of evidence. The degree of reliability is correlated to the creation of different opinions and points of views that are developed over past events. Different conclusions are made based on the different evidences presented, and even though the historians who make these conclusions believe in them, they know that absolute certainty is unrealistic. Because the evidences that some interpret are biased, the historians need the 'rigor of the scientist'. And because the 'rigor of the scientist' will most typically not tend to fill in every question mark, the 'imagination of the artist' helps fill in the voids. ...read more.

Some reasoned that because he suffered from these problems, he was dead. This of course is based on some evidence of injury however there is no solid evidence that proves his death; therefore, imagination has played an evident role. The mind develops the point of view. The people who had a particular form of perceiving and reasoning assumed and believed he was dead. However, not everyone, of course, agreed on this opinion. Because of the fact that every person has different perceptions, emotions, language and reasoning, its likely to have several different conclusions drawn from the same piece of evidence. This is why, unlike rigor, imagination refers more to the subjective part of history. Both rigor and imagination are necessary to history. While rigor allows the objectivity and main facts to enter into the historian's knowledge, the imagination fills in the voids uncovered by the rigor. This imagination is -of course- influenced by the individual historian's perception, reason, emotion and language. He or she will connect the dots brought upon by the rigor using his or her mind. The fact that ones imagination is unique to that of someone else's proves that it is possible to reach new perspectives on events. This means that new ideas flourish around the world and wide varieties of conclusions are drawn. ...read more.

All these sources of uncertainty play a role in the confidence of the historian. Because historians imagine things differently, depending on their individual reasoning and perceiving of the real world, they are each going to have individual conclusions that would differ from other historians. Because there are so many perspectives towards historical events, there is increased uncertainty. When a historian takes into consideration these two important sources of error-large number of opinions and lack of certainty-, it's hard for them be confident about conclusions. Anyhow, since historians trust that evidence is real and believe in their analysis of the events, they are confident about their own conclusions. After they undergo the twofold process of rigor and imagination, they can make a conclusion based on the evidence. This doesn't mean that they are absolutely certain about what happened. What they record is what they believe, but they of course leave a leeway and are open to error, inaccuracy, and opposing ideas. In conclusion, since the role of rigor and imagination are crucial to the interpretation of historical events, they are also crucial to the creation of opinions. Because rigor and imagination shape the way in which history is presented to us and since opinions stem from different interpretations of history, rigor and imagination are related to opinions. The creation of more opinions and the difference in thought both increase uncertainty, whose degree describes the confidence that the historian has. Word Count: 1,377 ...read more.