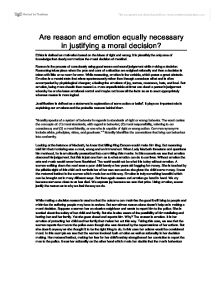 Are reason and emotion equally necessary in justifying a moral decision? Ethics is defined as motivation based on the ideas of right and wrong. It is plausibly the only area of knowledge that clearly summarizes the moral decision of mankind. Reason is the process of consciously using good sense and sound judgement while making a decision. Reasoning takes place when the pros and cons of a situation are weighed rationally and then a decision is taken with little or no room for error. While reasoning, emotion is the variable, which poses a great obstacle. Emotion is a mental state that arises spontaneously rather than through conscious effort and is often accompanied by physiological changes; a feeling: the emotions of joy, sorrow, reverence, hate, and lovei. But emotion, being more chaotic than reason i.e. more unpredictable at times can cloud a person's judgement whereby he or she loses emotional control and maybe not know all the facts so as to react appropriately whereas reason is more logical. Justification is defined as a statement in explanation of some action or beliefii. It plays an important role in explaining our emotions and the probable reasons behind them. ...read more.

It was her rationality on the other hand which made her decide that the man's behaviour was unacceptable and thus he had to be reported. Thus giving rise to the fact that emotion and reason at the same time can be crucial in making a decision. Take the example of a panel member on the jury panel of a court. Their main purpose is to judge the case presented before them logically with reason. Then they weigh the different aspects of the case with the facts given to them and then deliberate a verdict, with reason given the highest regard during the entire process. The outcome: the defendant has been convicted and is justly given his due punishment. This is a clear cut case of reason being used to make a decision where a rational and correct decision has been taken. But let's involve emotion into this situation. Suppose one of the jury members lost one of his close relatives because of a murderer, he would naturally be blood-thirsty for revenge. Thus, he would have his mind set on punishing the criminal, even if the defendant had the slightest chance of being innocent or being acquitted in the name of self defence, the emotion of that particular jury member would be enough to ruin all the hope for the defendant. ...read more.

An example of a context in which it seems right to lie is this: you are a citizen of Nazi Germany, 1940. You are hiding a family of Jews in your attic. The German police come to your door and ask whether you know the whereabouts of that particular family of Jews. This seems a clear case in which preventing harm seems more important than telling the truth. A contrary case might be the following: Imagine that an acquaintance of yours reveals that she has committed manslaughter and that she's very remorseful about it. You are called into court to testify. You know that if you tell the truth, she will go to jail (i.e. suffer a harm). The remorse she shows suggests that she will never commit another crime if she is not sent to jail. Our instincts probably tell us that you should nonetheless tell the truth in such a case, even if it seems likely to do more literal harm than good. This decision might be made on the grounds that truth telling is part of supporting a system of justice that we think overall fair and very valuable."iv . i http://www.thefreedictionary.com/emotion ii www.wordreference.com/definition/justification iii http://www.allaboutphilosophy.org/morality.htm iv http://www.ethicsweb.ca/guide/moral-decision.html ?? ?? ?? ?? ...read more.