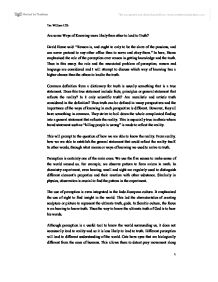 Are some Ways of Knowing more likely than other to lead to Truth?

Are some Ways of Knowing more likely than other to lead to Truth? David Hume said: "Reason is, and ought to only to be the slave of the passions, and can never pretend to any other office than to serve and obey them." In here, Hume emphasised the role of the perception over reason in getting knowledge and the truth. Thus in this essay, the role and the associated problem of perception, reason and language are considered and I will attempt to discuss which way of knowing has a higher chance than the others to lead to the truth. Common definition from a dictionary for truth is usually something that is a true statement. Does this true statement include facts, principles or general statement that reflects the reality? Is it only scientific truth? Are moralistic and artistic truth considered in the definition? Thus truth can be defined in many perspectives and the importance of the ways of knowing in each perspective is different. However, they all have something in common. They strive to boil down the whole complicated finding into a general statement that reflects the reality. ...read more.

Cases could be considered to establish a general statement for the reality. Thus this corresponded with the definition of truth which is the general statement that could reflect the reality. However reason also has its own problems that diluted the chance of leading to the truth. Although inductive logic gives us absolute certainties but it does not mean absolute truth. For example all young men are easy to get emotional. Jason is a young man and so he is emotional. We got a totally valid and absolutely certain conclusion but it does not necessarily reflect the truth. Thus the truth of the conclusion is heavily depended on the truth of the premises in the deduction. Similarly, the probability of a general statement that is resulted from inductive logic is depended on the number of cases that are being considered. If Henry knows that two of his friends like to eat chocolate, he concluded that all of his friends will like to eat chocolate also. Clearly, his general statement is weak and hasty because only two cases are considered. Thus deductive and inductive logic both fundamentally relied on the assumption to reflect the truth. On the other hand, we based on our observation to make an assumption. ...read more.

This difference might further distort the statement and the reality also. Secondly, this diversity slowed down the process of spreading the truth out. The other problem is the nature of being secondary in language. We first have the idea and the language began to organise them into category. In taxonomy, individual observations are made and they are organised into specific characteristic for categories of animals. Thus we have each particular idea and we use the language to organise into a coherent form. This suggests that language is being the secondary source. When perception and reason had gathered the raw material, language came in to arrange them into categories. After perception, reason and language are considered, each way of knowing could not independently lead to the truth because each of their associated problem. Only when perception is combined with reason, a general statement that reflects the reality is produced. However perception is slightly more important than reason because it first provides the necessary material for assumption. Also language acts as a catalyst to speed the process of spreading the truth out. However, language is likely to distort the meaning of the statement and its secondary nature did not allow it to lead to the truth. ?? ?? ?? ?? Tso William 12B 1 ...read more.