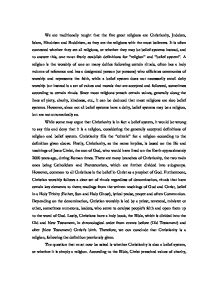 Belief System or not?

We are traditionally taught that the five great religions are Christianity, Judaism, Islam, Hinduism and Buddhism, as they are the religions with the most believers. It is often contested whether they are all religions, or whether they may be belief systems instead, and to answer this, one must firstly establish definitions for "religion" and "belief system". A religion is the worship of one or many deities following certain rituals, often has a holy volume of reference and has a designated person (or persons) who officiates ceremonies of worship and represents the faith, while a belief system does not necessarily entail deity worship but instead is a set of values and morals that are accepted and followed, sometimes according to certain rituals. Since most religions preach certain values, generally along the lines of piety, charity, kindness, etc., it can be deduced that most religions are also belief systems. However, since not all belief systems have a deity, belief systems may be a religion, but are not automatically so. ...read more.

According to the Bible, Christ preached values of charity, kindness, piety, forgiveness, humility and peace. This is shown well in two of the most well known quotes from the Bible; "You have been taught, 'an eye for an eye and a tooth for a tooth.' But I tell you not to try to get even with those who have done you wrong. If someone slaps your right cheek, turn the other one towards them and let them slap it too. If someone sues you for your shirt, give up your coat as well"1. The following passage is also well known: "If I did not love others, I would be nothing more than a noisy gong or clanging cymbal. [...] I would be nothing, unless I loved others. [...] I would gain nothing, unless I loved others. [...] Love is patient, love is kind, it is not jealous, boastful, proud or rude. Love is not selfish or quick tempered. ...read more.

This state can be attained by emptying oneself of worldly and selfish desires and achieving a state of mental purity, where respect for other beings take precedence over personal comfort. Also, Buddhists do not have a specific holy book, as much of the teaching is passed on from sage or Buddha to student. Moreover, Buddhist ceremonies are not officiated by one designated person; instead, Buddhist monks, who have devoted their life to the search for the Buddhahood, will play an active role in certain ceremonies, though much of Buddhist growth is done personally, or with only a few select people. Through all this, we can conclude that Buddhism is not a religion in the purest sense of the word, and seems to be a belief system instead. Buddhists follow certain 1 Holy Bible: New Testament and Psalms, Matthew 5.38-42, Contemporary English Version, Canadian Bible Society 2 Holy Bible: New Testament and Psalms, 1 Corinthians 13.1-8, Contemporary English Version, Canadian Bible Society ...read more.