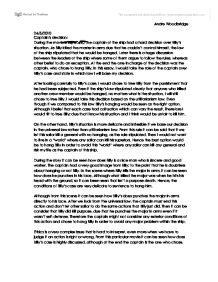 Captain's decision: During the movie Billy Budd, the captain of the ship had a hard decision over Billy's situation. As Billy killed the master in arms due that he couldn't control himself, the law of the ship stipulated that he would be hanged. Later there is a huge discussion between the leaders of the ship where some of them argue to follow the rules, whereas other belief to do an exception. At the end the one in charge of the decision was the captain, who chose to hang Billy. In this essay, I would take the role of the captain over Billy's case and state in which law I will base my decision. ...read more.

From this rule it can be said that if we let this sailor kill a general with no hanging, as the rule stipulated. Then I would not want to live in a "world" where any sailor can kill his superiors. Hence the best option would be to hang Billy in order to avoid this "world" where any sailor can kill any general and risk my life as the captain of this ship. During the story it can be seen how does Billy is a nice man who is sincere and good worker. The captain had a very good image from Billy; to the point that he is doubtless about hanging or not Billy. ...read more.

Ethics is a very complex issue that is hard to interpret, even more when we have to judge if an action is right or wrong. From this particular movie it can be seen how does Billy's case is highly discussed, although at the end the captain is the one who chose. The captain from the movie decided to hang Billy, due that he base his thought in the universal law in order to avoid major problems. Whereas me as the captain I would consider the situation of the action and base my decision in utilitarianism law, where I would end to free Billy. I would be more flexible due that the universal rule is to general, where in some cases it can been found unfair because not always the situation is the same. ?? ?? ?? ?? Andre Woodbridge 24/5/2010 ...read more.