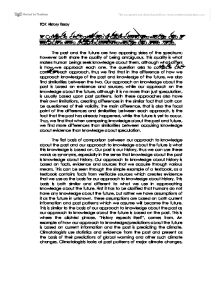 In other words, both approaches to knowledge are limited as both carry certain biases which make us question their validity. As we approach knowledge about history we have to be aware of the many biases that may be prevalent. These biases all stem from the same issue of us (people we are seeking the knowledge) not being the primary source/witness of the historical event. As we read a piece of historical analysis, we are instantaneously flooded with the author's point of view, which include his biases; such as whether he is supporting any particular group (social bias), if he has left out any details (deliberate manipulation), whether the topic the historian has chosen is influenced by current preoccupations (topic choice bias), whether the historian has only chosen evidence that supports his point of view (confirmation bias), or whether the historian has disregarded his pre-existing cultural and political prejudices (national bias) before writing the piece. An example of one of these biases would be the exclusion of the Japanese massacre of the Chinese people during World War Two in Japanese history textbooks. This would be an example of deliberate manipulation, as the Japanese government purposely excluded this significant event in history as a way of erasing their gruesome past. Moreover, since history, as we know it, is only what has been recorded by previous sources, we can not be sure of any unknowns that might have happened. ...read more.