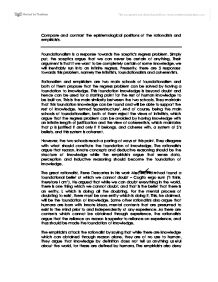 Compare and contrast the epistemological positions of the rationalists and empiricists

Compare and contrast the epistemological positions of the rationalists and empiricists. Foundationalism is a response towards the sceptic's regress problem. Simply put, the sceptics argue that we can never be certain of anything. Their argument is that if we want to be completely certain of some knowledge, we will inevitably run into an infinite regress. Presently, there are 3 responses towards this problem, namely the infinitists, foundationalists and coherentists. Rationalism and empiricism are two main schools of foundationalism and both of them propose that the regress problem can be solved by having a foundation to knowledge. This foundation knowledge is beyond doubt and hence can be used for a starting point for the rest of human knowledge to be built on. This is the main similarity between the two schools. They maintain that this foundation knowledge can be found and will be able to support the rest of knowledge, termed 'superstructure'. And of course, being the main schools of foundationalism, both of them reject the views of infinitists, which argue that the regress problem can be avoided by having knowledge with an infinite length ...read more.

They argue that knowledge by definition does not tell us anything useful about the world, for these are defined by humans. The empiricists also deny the existence of innate ideas. Instead, John Locke, the British empiricist, maintained that humans are born with our mind much like a blank slate, or tabula rasa, and that when we experience things, these experiences are being written on this blank slate, building our knowledge. Some empiricists have argued that it is indubitable that we can perceive and we are having experience. For instance, while it can be doubted if I am reading a passage, it is indubitable that I am having the perception of a passage written on a piece of paper (or on the computer screen). This, arguably, can be made the foundation of knowledge as they are indubitable. While both rationalism and empiricism differ in their view of having different foundation of knowledge, it is observed that both do not make any significant headway in completely defeating scepticism. ...read more.

The rationalists and empiricists both fail to really defeat this argument. The rationalist can only be sure that there is entity that is doing all the doubting. Descartes had relied upon the existence of God and the so called 'clear and distinct idea' to establish the truth of reality from the foundational belief of 'I think, therefore I am.' However, since Descartes' argument for the existence of God had been seriously doubted, his argument is therefore considered unconvincing in general. The empiricists, on the other hand, could only establish the fact that we are having perception. They could not ascertain if the reality existed. In conclusion, the rationalists and empiricists, despite their obvious difference in methodology, they are in fact similar in a lot of aspects. Both of them agree that a foundation belief is the key towards the regress problem, and that both of them have not been able to satisfactorily defeat the sceptics. The main difference lies in the fact that they have different ideas of what should constitute the foundational belief. ...read more.