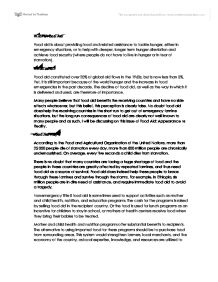 What is Food Aid Food aid is about providing food and related assistance to tackle hunger, either in emergency situations, or to help with deeper, longer term hunger alleviation and achieve food security (where people do not have to live in hunger or in fear of starvation). Introduction Food aid constituted over 20% of global aid flows in the 1960s, but is now less than 5%. Yet, it is still important because of the world hunger and the increase in food emergencies in the past decade. The decline of food aid, as well as the way in which it is delivered and used, are therefore of importance. Many people believe that food aid benefits the receiving countries and have no side effects whatsoever, but this belief, this perception is clearly false. No doubt food aid does help the receiving countries in the short run to get out of emergency famine situations, but the long run consequences of food aid are clearly not well known to many people and as such, I will be discussing on this issue of Food Aid: Appearance vs Reality. Food Aid Helps According to the Food and Agricultural Organization of the United Nations, more than 25 000 people die of starvation every day, more than 800 million people are chronically undernourished. ...read more.

No doubt it is in human nature for us, humans, to be self-centered, but is it really right to partake in the idea of altruism? Clearly, the vast majority of people think that food aid is good and all for the sake of the recipient countries, but that is in fact not the case. As such we can see this misconception which has arisen due to the different human perceptions of different individuals and the way we have been exposed to only the "good" side of food aid. Doesn't Target the Needy Title II development food aid is usually distributed through so-called "food-for-work" programs that hire the jobless to provide manual labor for road improvement, irrigation development, and other infrastructure projects, in exchange for food. In theory, society as a whole benefits from this sort of program-the jobless get to eat, while the rest of society gains from the public works projects. Yet a careful examination shows that food-for-work benefits the well-off disproportionally, while the poor receive no long-term gains. An example from Haiti, where so many people are deprived of enough to eat, makes this clear. In a particular village, one family controlled the local government and community offices. ...read more.

In October and November 2001, TVs worldwide showed the airdrop of food rations by US aircrafts on Afghanistan. A few tons of food were dropped, which was insignificant compared to the monthly national requirement of more than 50,000 tons needed by the Afghan population at that time. AOK: Politics. The placement of public opinion of the country above all else, includes the basic core of saving lives, politics over the needy. Is this trail of thought and action really necessary and for the good of the society? This goes for what the government promises its people, to ensure better living conditions, but is at the sacrifice of the recipient countries, is it really worth the trade? Usage of media as propaganda Many times, on the tv or in newspapers and magazines, pictures of hungry and skinny malnourished people are shown, bones sticking out of their body. Videos of donor countries dropping food aid in recipient countries are also often depicted in the news. All these implants in viewers a sense of sympathy and pity towards these malnourished people and influences viewers to perceive that the richer countries are doing all they can to help combat hunger in these countries, when the fact is absolutely the opposite. Media propaganda affects emotions, which in turn will affect how people perceive things, thus is a major factor. ...read more.