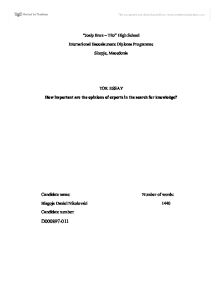 "Josip Broz - Tito" High School International Baccalaureate Diploma Programme Skopje, Macedonia TOK ESSAY How important are the opinions of experts in the search for knowledge? Candidate name: Number of words: Blagoja Daniel Nikolovski 1440 Candidate number: D000897-011 Today we live in a world where people trust and rely on opinions of experts. Wherever we turn, governments, courts of justice, media, text books, business companies and others, all focus on the opinion of experts. Experts are considered authorities in their specific areas of knowledge and they are distinguished as such by their doctoral degree, or important scientific achievements which they have made in their particular field. Nevertheless, how far are expert opinions trustworthy? Can they sometimes err in their claims? In our search for knowledge, the opinions of experts are important, to the extent they are based more on evidence, and less on assumptions and hypotheses. First of all, experts are human beings like all of us and they are guided in their search for truth not only by objective research, but also by emotion i.e. their biases, prejudices, cherished theories etc. There are numerous examples of this, such as the debate between Creationists and Evolutionists about origins, the ethical controversy about euthanasia, abortion, death penalty and other issues which include a fair amount of emotions. Especially, this is so in cases where expert witnesses are invited to share their opinions in public conferences or court trials, as was the Creation - Evolution court trial in Little Rock, Arkansas in December 19811. ...read more.

On the other hand, some other experts claimed that the said vaccine comes with certain side effects to human health, because it may result in several syndromes in up to 10% of the population. Thus, we see that medical expert opinion is extremely important, because it informs governments and the general public of the dangers of a certain disease and the need to prevent it, as well as warning them of the possible side effects and syndromes contained in the proposed solution to the problem. It has been said that "half-truths are worse than lies." The combined testimony of many experts from one or several areas of knowledge leads to a better, overall understanding and proper solutions. Bias also affects our perception and world views, and experts themselves are no exception. This is mostly evident in history, where experts from different nations give different interpretations of the same historical events. Students of history should bare these things in mind, and they should accept relevant data from different sources that agree among each other, at the same time being cautious and reserved towards evaluations and interpretations of historical events. For example, historians refer to the opinion of military experts of the U.S.Army who claimed that the dropping of atomic bombs on Hiroshima and Nagasaki in August 1945 was necessary because otherwise the Japanese were going to fight forever and thus WWII would be continued much longer, costing the Allies and Japanese many more casualties and material resources. ...read more.

The biases and political propaganda are much greater in this area than in sciences, either natural or social, yet we speak of political experts these days, and often media and governments are associated with them. It must be that their opinion is worthy and important, not just in influencing public views, but also in actually evaluating current trends. Certain segments of the population develop a significant amount of trust in some experts, which in turn increases their influence. Sometimes, this is true even in the case of experts not promoted by governments and most influential media, and they are more popular when posing as "independent" experts. One chief reason that gives expert opinion great importance, is the fact that their research is verified by peer review, before appearing in expert publications, such as expert magazines and research papers. This is more applicable to natural sciences, but generally, distinguished experts in their field, had to have been recognized as such by their colleagues, even if they are promoting different theories and conflicting views. This is not strange, because evidence is what matters, and evidence gives importance to experts and their opinions. It is my conviction that expert opinion is highly important. After all, the very distinction in public courts between common witnesses on the one, and the so called expert witnesses on the other hand, consists in the fact that common witnesses are important only when giving actual testimony concerning facts they have witnessed, while expert witnesses are afforded the privilege of expressing opinions. ...read more.