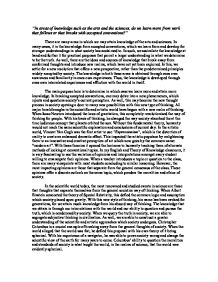 &quot;In areas of knowledge such as the arts and the sciences, do we learn more from work that follows or that breaks with accepted conventions?&quot;

"In areas of knowledge such as the arts and the sciences, do we learn more from work that follows or that breaks with accepted conventions?" There are many areas in which we may attain knowledge of the arts and sciences. In many cases, it is the knowledge from accepted conventions, which we learn from and develop for stronger understandings in what society has acclaimed to. In such, we assimilate the knowledge at hand and further it for practical purposes that permit a larger understanding in what we determine to be the truth. As well, there are the ideas and sources of knowledge that break away from conformed thoughts and introduce new realms, which have not yet been explored. In this, we settle for a new resolution that offers a new perspective, rather than the predetermined principles widely accepted by society. The knowledge in both these areas is obtained through ones own awareness and familiarity in ones own experiences. Thus, the knowledge is developed through ones own interrelated experiences and affliction with the world in itself. The main purpose here is to determine in which case we learn more and attain more knowledge. In breaking accepted conventions, one may delve into a new phenomenon, which rejects and questions society's current perception. ...read more.

The knowledge that we obtain is through our interrelations with the world and our ability to question and pursue the truth, which is condemned by society. When we query the truth in society, we are able to segregate subjective thinking in civilization. As well, we are able to construct a greater understanding of the scientific and artistic approaches which society undergoes. Christopher Columbus is a crucial example of breaking away from the general thoughts of society. When the world alleged that the world was flat, he defied this proposal with his own theory of it being spherical. With his experience of a navigator, he was able to prove society wrong and change the scientific view of the earth for many years to come. Columbus' ability to question the moralities and standards of society is what taught the world, in the realms of science, that the world was evidently spherical. Jean Jacques Rousseau, a famous philosopher, was a strong believer in the idea that ones experience was much more value than a definitive answer. He said, "The person who has lived the most is not the one who has lived the longest, but the one with the richest experiences". ...read more.

Furthermore, when we break the conventions in society, our theories may not be explained correctly or accepted by society. In this scenario there is no breakthrough in the scientific and artistic world, where one may be better off learning from societies already developed ideas rather than creating their own philosophies. In society, a common misconception in humans is to search for an objective answer, which may not always be possible. Within these realms, it is important to identify that our truth is within a context of our interpretation. When humanity breaks apart from society's conventions, we are able to question the context which we are placed in that offers a prominent learning experience, comparative to following the regimented conventions of society. At the same token, the Knower should be aware of the conventions of society. If one is to question the scientific or artistic world, they must be aware of the current conventions to question. As well, a better understanding and further analysis may be concocted through inquisitive thinking. We must not exquisitely take the views of society; instead use our own reasons and interpretations to evaluate the truth. Breaking apart from convention allows individuals to utilize their own experience and reason, which offers a larger learning value than of conformity. Words: 1275 ...read more.