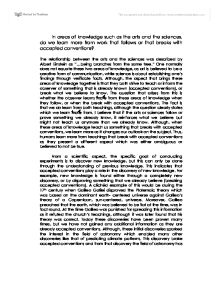 In areas of knowledge such as the arts and the sciences, do we learn more from works that follows or that breaks with accepted conventions?

People believed in this theory as it was advocated by the Christian churches and that there was no other theory to challenge it. This theory was finally disproven mainly in the 19th century through experiments conducted by Louis Pasteur. Pasteur's experiments indicated that microcosms were the actual cause of diseases. Although it was highly controversial when proposed as a theory, it is now the cornerstone of all medical research. This theory broke accepted conventions and has led to many important innovations such as antibiotics and hygienic practices. If spontaneous generation were still an accepted theory, medicinal science would not have progressed as far as it has come today. Not only have humans learned from the immediate experiments of the germ theory, but it had also led to other discoveries and understanding of the human body. Thus, humanity in general has learned more from the breaking of accepted conventions as it has permitted science to progress to a level much beyond where it begun. Moreover, in my opinion the arts are another example of how we have learned more from work that has broken accepted conventions. Art is an area of knowledge where creativity and innovation are not only promoted, but also expected. Fashion is an expression of ones self and is considered as an art form. ...read more.

We learn more from works that break accepted traditions as they help us gain knowledge of the world and "...recognize truths we were previously unaware of and reignite our sense of wonder in the world." (Theory of Knowledge - Richard van de Lagemaat). Thus, breaking accepted conventions in the form of art paintings helps us to gain knowledge of the painter's perspective on a certain issue while also helping us to identify the realities of life that we had not noticed before. In conclusion, it seems that works that break accepted conventions enable humanity to progress. We are able to learn more from these works as they go against what we believe to know and portray a new perspective that was either not thought of or was not proven. Although we do learn from works that follow accepted conventions as it reinforces our beliefs in that subject. The arts and the sciences are two very different forms of communicating ideas, although they both attempt to make sense of the world which gives the observer different perspectives of sometimes a similar situation. Thus, the arts and the sciences are complimentary areas of knowledge as arts give an inside look into a subject, while the sciences provide an outside look. Accepted conventions are meant to and should be broken in order for the progression of society. ...read more.