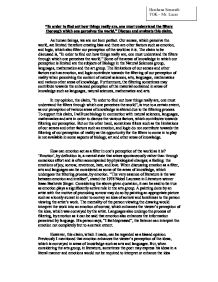 &quot;In order to find out how things really are, one must understand the filters thorough which one perceives the world&quot; - Discuss and evaluate this claim.

But, when considering the arts group, in literature, sometimes the poet may express his ideas in a literal manner and emotions would not be required to interpret or enhance the idea behind the literary work. When considering languages, sometimes the language communicated will be direct in manner and the information will be clearly perceived by the receiving party without the use of emotion. Therefore, we can see that the filter of emotions is not sometimes used in the filtering process involved in the perception of the contents of various areas of knowledge. How can logic act as a filter in one's perception of reality? 'Logic' by definition is, the study of the principles of reasoning, especially of the structure of propositions as distinguished from their content and of method and validity in deductive reasoning. Logic can be divided into two areas, which are deductive logic and inductive logic. Mathematics can be considered as an area of knowledge where the filter of deductive logic is used to perceive and understand the contents and concepts. The concept of deductive logic is as follows. There is a rule and there is a premise, and the conclusion is drawn using the rule and the premise. Considering mathematics, a rule is, whole numbers are integers. A premise can be that two is a number. ...read more.

Therefore by understanding the filtering process due to the limitations of our senses we are able to perceive the aspect of reality related to the specific are of knowledge. But this claim is not always true. When considering the mathematics groups, our senses play an insignificant role in our perception of the various concepts. The concepts are not filtered due to the limitations, as they do not affect our perception since the figures are directly presented and are logically interpreted. Despite the counterclaims regarding the fact that the understanding of the limitations of our senses and other factors such as emotion, and logic acting as filters, my opinion remains solid. The limitations of our senses and other factors such as emotion, and logic have to be understood in order to perceive the reality of the contents studies in various areas of knowledge. The filters such as emotion enhance the ideas provoked in an area of knowledge and the understanding of the filters used such as our limitations and logic, help us understand the reality of an area of knowledge by elimination of error which could be caused by a filter. However, due to the unavailability of opportunity for filters to take on active roles, a counter claim derives from a different point of view. Citation reference "Isaac Bashevis Singer" Google. March 16th http://almaz.com/nobel/literature/1978a.html Word count: 1390 ...read more.